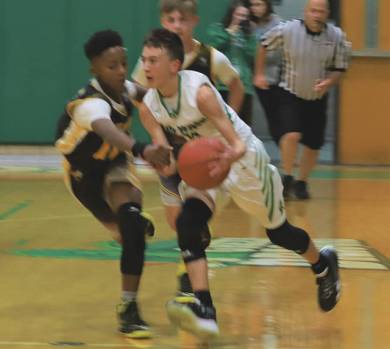 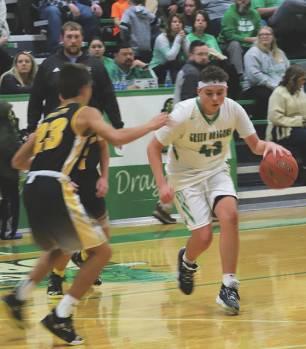 <p>John Henson | Harlan Enterprise</p> <p>Harlan’s Maddox Huff looked for an opening in the Middlesboro defense on Thursday in seventh- and eighth-grade basketball action. Huff led the Dragons to a 50-39 win with a 31-point performance.</p>

Harlan avenged a 12-point loss to open the season by defeating visiting Middlesboro 50-39 on Thursday in seventh- and eighth-grade basketball action.

Cole Cornett scored 11 points and Will Shepherd added eight as Harlan won 30-26 in fifth- and sixth-grade action. The Dragons outscored Middlesboro 11-5 in the fourth quarter to improve to 4-3 overall.

Harlan will return to action Friday at home against Jenkins.

Harlan won 37-30 in fifth- and sixth-grade action. Will Shepherd paced the Dragons with 11 points.

Harlan defeated Lynn Camp 48-44 in previously unreported action. Huff poured in 36 for the Dragons, followed by Montanaro with seven, Jared Moore with three and Brody Owens with two.

Harlan won 39-16 in fifth- and sixth-grade action. Shepherd and Cornett scored 10 each to lead the Dragons. Freyer added nine and was followed by Perry with five, Bailey with three and Myers with two.

The seventh- and eighth-grade version of the Black Bears Preseason Tournament will be held Saturday at Harlan County High School.

Cawood will play Evarts in the opening game at 10 a.m. Rosspoint will play the Cawood-Evarts loser at 11 a.m. Wallins will take on Cumberland at noon, with James A. Cawood playing Black Mountain at 1 p.m.

The semifinals are set for 2 p.m. and 3 p.m., with the championship game to follow.