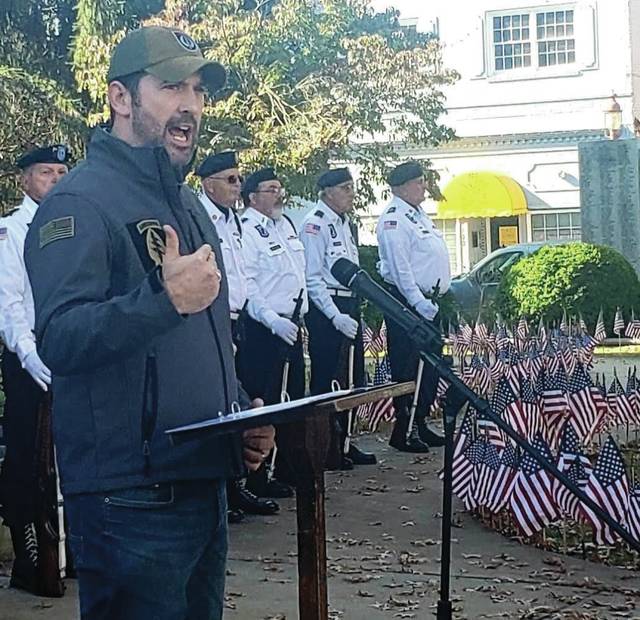 Members of the Harlan County Honor Guard led the annual Veterans Day program in front of the courthouse on Monday. The program has become a cherished Harlan County tradition that draws residents, as well as veterans and their families, to downtown Harlan each year to honor the service and the sacrifices of the American soldier.

Harlan County honored veterans of both past and present Monday morning with a ceremony on the courthouse lawn, remembering their sacrifices for the many freedoms Americans now have.

Lisenbee said he was asked to speak and gladly accepted, but he struggled preparing what he was going to say because he is not a veteran.

Lisenbee said he was, however, able to enjoy the many freedoms of the United States because of the men and women who did make those sacrifices.

He then turned the microphone over to Johns, who served six years in the Army’s airborne infantry and another six years as a special forces operator or Green Beret with the 20th group special forces.

Johns said he did not feel worthy to be able to speak at such an event, adding “I don’t feel worthy of speaking on behalf of my fellow veterans as I feel that I’ve given so much less than half of the men here have, and I want to personally thank you for your service.”

He continued speaking on how war is often “painted as glorious” by society and is something “most Americans only experience on television.”

“You’ve not experienced the smell of rotting blood and bodies that have been ripped apart by explosives and shrapnel, burning flesh and diesel fuel, cordite, powder burning from a machine gun that’s shot more than a thousand rounds in under a couple minutes,” Johns said. “Many of you have not felt the sting of sweat, blood, weapon oil and sand in yours eyes. You don’t know how unforgiving a patrol in the jungle is. You haven’t had the air sucked from your lungs by an IED or RPG. You haven’t felt the displacement of air by a bullet as its passing by your head because someone just tried to kill you.

“War and the things of war are the closest thing one can get to, what I would consider, Hell on Earth.”

Johns continued his speech tying much of what veterans experience to those “lost” in the world, diving heavily into his Christian faith.

By the end of Johns’ speech, he said, “I’m going to tie this back into my speech on veterans. As we read the book of Isaiah, Jesus Christ said ‘The Spirit of the Lord is upon me because he has anointed me to proclaim the good news to the poor, the liberty to the captive, and recovering of sight to the blind, to set at liberty those who are captive.’”

The ceremony concluded with a prayer, with many veterans then going to the Harlan Christian Church where a luncheon was provided for them and their spouses by Don’s Super Saver and Doss Fuelco.