Wildcats embrace ranking as No. 1 team in nation 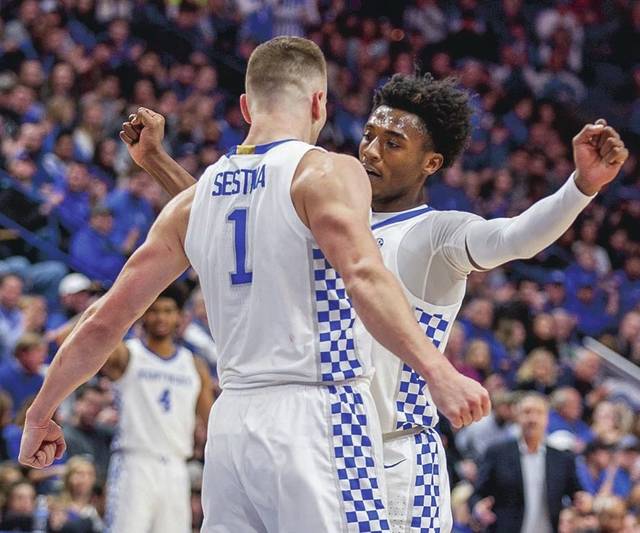 LEXINGTON (KT) — Immanuel Quickley wasn’t surprised when Kentucky climbed to the top of the polls Monday.

“We haven’t been No. 1 that long,” he said with a smile. “I think it’s been like 20 minutes. Still kind of getting adjusted. But I think we’ll have a good mindset. Coach does a good job of keeping us humble. We know we’re No. 1, but we know we’re not where we need to be yet. By the end of the year, we want to be that No. 1 team and we know what we’re looking for from each other.”

The Wildcats (2-0) who opened the season with two straight victories, including a 69-62 triumph over No. 3 Michigan State in the Champions Classic last week, replaced Spartans as the top-ranked team in the latest Associated Press Top 25 poll. It marked the seventh time in John Calipari’s tenure the Wildcats have been ranked No. 1.

Quickley said the ranking “feels pretty good” but added the Wildcats are aware of the timing of the ascension to the top.

“We know it’s still early though,” Quickley said. “We’ve got a long way to go as far as being the team we want to be, playing against ourselves every day. We just want to be No. 1 at the end of the season.”

Like Quickley, Kentucky coach John Calipari wasn’t surprised by the ranking and likes his team’s chances of staying at the top based on his team’s performances in the first two games, especially defensively. He added the team’s offense remains a work on progress.

“If you guard and you contest shots and you’ll rebound, you’ll have a chance to win every game,” he said. “The issues that we’re coming back to is, OK, how do we play offensively and how do we keep all these guys engaged when you’re playing random? In other words, it’s not like just rolling a ball out and playing, but it means you’re running an action that ends up in something that ends up in a drive, a play, a kickback, a post that the rest of that is random.

“If a guy can’t engage himself in that, then you may have to run stuff for him to get him engaged in the game, especially offensively. But it’s just going to take time.”

Although Calipari isn’t sure how his team will handle being the top-ranked team in the country, Quickley said the team’s ability to beat Eastern Kentucky soundly following a big victory “shows a lot about this team.”

“We’ve got a lot of mature players,” he said. “From top to bottom, I think guys come in ready to play, they know their roles, they know what we need from each and every one of them. So that says a lot about this team’s maturity and that will help us a lot as the season goes on.”

Evansville will be the first team to give the Wildcats a test at the top this season. The Aces (1-0) are coached by former Kentucky standout Walter McCarty, now in his second season at Evansville. McCarty’s squad opened with a 79-75 win over Ball State last week.

Calipari welcomed the return of McCarty and said the fans will also embrace his appearance. McCarty played in Kentucky’s 1996 National Championship team.

“I’ve known Walter for a long time, so it won’t change how I play the game but I’m happy for him,” Calipari said. “Watching his team, he’s doing some good stuff. I’m always happy when we can bring guys back here. Bringing them coaching teams, we’ve done it before. I think it’s a great thing.”

Because of past history, McCarty knows what it will take to be successful against his former team.

“I don’t think you can prepare a team to play there (Rupp Arena),” he said. “We have to go in there and play the right way. Kentucky is going to be very aggressive. We just have to make the right play and not try to do too much. We have to stay with what we do and trust what we do. No matter who we are playing, we have to play the right way and value the basketball. Be a team and do it as a team.”

Maxey came off the bench to ignite the Wildcats by scoring 26 points on 7-of-12 shooting from the field with a three 3-pointers. The performance topped Terrence Jones’ 25 points against East Tennessee State in 2010 for the most points by a freshman in their debut as a Wildcat. Maxey scored nine points and grabbed three rebounds in a win over Eastern Kentucky last Friday.

Calipari was on hand to watch Brad Calipari’s debut at Detroit Mercy Sunday. The Titans dropped an 84-65 loss at North Carolina State. Calipari played 14 minutes and was 0-4 from the field.

“He took a charge,” Calipari said. “He lunged and took a charge on a guy. He smashed their big guy in the back to make sure we could get a rebound. He tipped a ball free. He ran hard. He looked good. He missed some shots.”