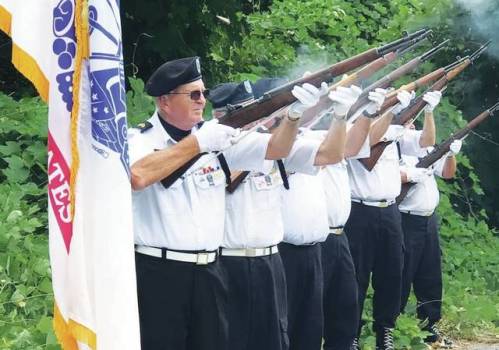 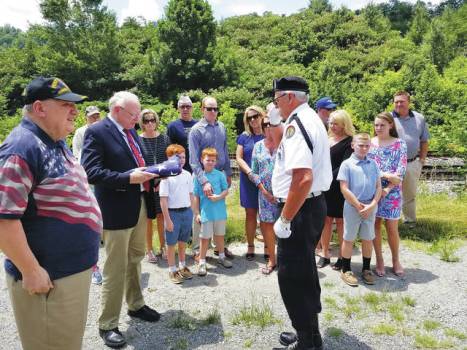 <p>Family of Gillis Hendrickson, including sons Kent and Steve Hendrickson, attended a highway dedication in Loyall. Kent Hendrickson was presented with the flag by the Harlan Honor Guard.</p> 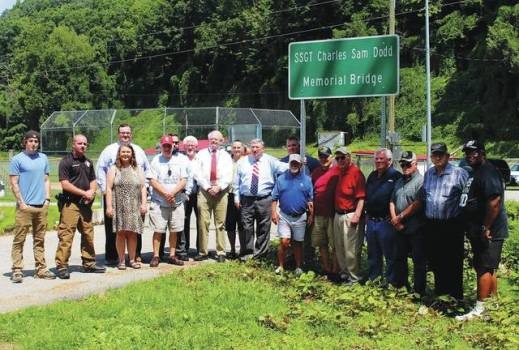 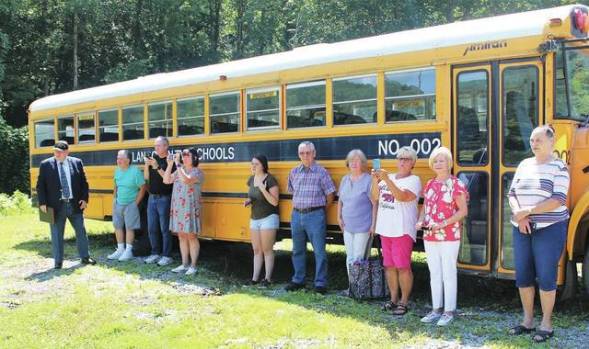 <p>Family of Ed Davenport attended a bridge dedication in Gulston. John Dodd, chairman of the Board to Preserve Military History conducted the dedication.</p> 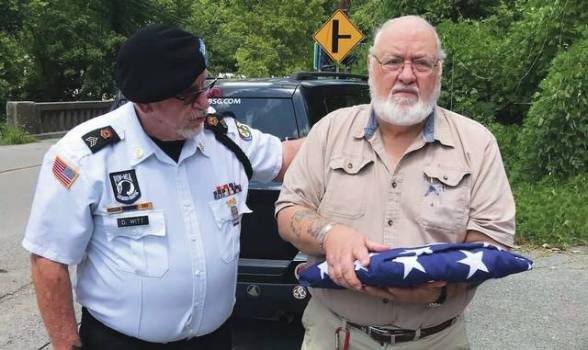 During the summer of 2019, the Board to Preserve Military Heritage in Harlan County conducted several dedications honoring veterans of the United States Armed Forces.

Family and friends attended a highway dedication honoring First Sergeant Gillis Hendrickson on July 2. Signs were placed on a section of KY 840 near the flood gate and ending near mile marker 2.890 in Loyall. John T. Dodd (Ret. army), chairman of the Board to Preserve Military Heritage in Harlan County, conducted the ceremony. The Harlan Honor Guard performed military rites.

Hendrickson fought in the Pacific Theater of Operations. The 64th Company D Army Airbase was involved in several major battles: The Battle of the Lea, New Guinea Campaign, Battle of Leyte Gulf, Philippines Campaign, The Battle of Port Moresby. The Battle of Mindanao posed the greatest challenge for the Liberating Allied Forces due to the location and terrain, the extended Japanese defenses and the strength and conditions of the Japanese Forces.

Hendrickson contracted malaria, shrapnel wounds and survived airplane crashes. He carried his army Bible with him throughout the war.

On Aug. 1, a bridge dedication ceremony was held near the Tri-City Ball Park in Benham in memory of SSGT Charles Sam Dodd. He was born Nov. 5, 1947 in Harlan County to Samuel Lee Dodd and Mary Keith Dodd. He was in the United States Army.

Charles Sam Dodd served in the Vietnam War obtaining the rank of staff sergeant. He was seriously wounded in the upper right thigh from a .51 caliber machine gun on May 10, 1970 which disabled him for life. SSGT Dodd died on Nov. 6, 1978 as a result of his wounds from Vietnam. He was a member of the Veterans of Foreign Wars Post 10281 at Radcliff, Kentucky and also served the post assisting fellow post veterans with their claims and problems.

A bridge dedication honoring Ed Davenport was held Aug. 3 in Gulston. Davenport enlisted in the United States Navy on Aug. 4, 1943, during World War II. He received Basic and Advanced Training at the Great Lakes Naval Training Center. Upon completion of his training, he was assigned to the Pacific Theater.

Davenport served on five different ships and rose to the rank of Motor Machinist Mate Second Class. He received his discharge from the United States Navy on March 11, 1946. He was assigned to the CV6 United States Naval Reserve to fulfill his six-year military obligation. He received the following medals: American Area Award, World War II Victory Medal, Asiatic Pacific Medal with four Battle Stars and the Philippines Liberation Medal.

A bridge dedication was held on KY 38 in Shields honoring PFC Theodore L. “Ted” Brown on Saturday on Aug. 10.

PFC Brown was born Sept. 6, 1948, to Theodore L. Brown and Emiline Cloud Brown in Harlan County. He enlisted in the United States Army in the fall of 1966. After completing Basic Combat Training, Advanced Individual Training and Airborne Training at Fort Benning, Georgia, he was assigned to A Troop, Third Squadron 5th Cavalry, 9th Infantry Division of Bien Hoa Providence, South Vietnam on May 5, 1967.

PFC Brown was killed in action (KIA) on Aug. 28, 1967 while engaged with the enemy. He was killed by an explosive device while serving as an armor crewman with his unit. PFC Brown received the following awards: The Purple Heart, Airborne Jump Wings, Vietnam Service Medal with one star, Vietnam Campaign Medal and the National Defense Service Medal.