Stoops says his focus is on UT, not Florida State job 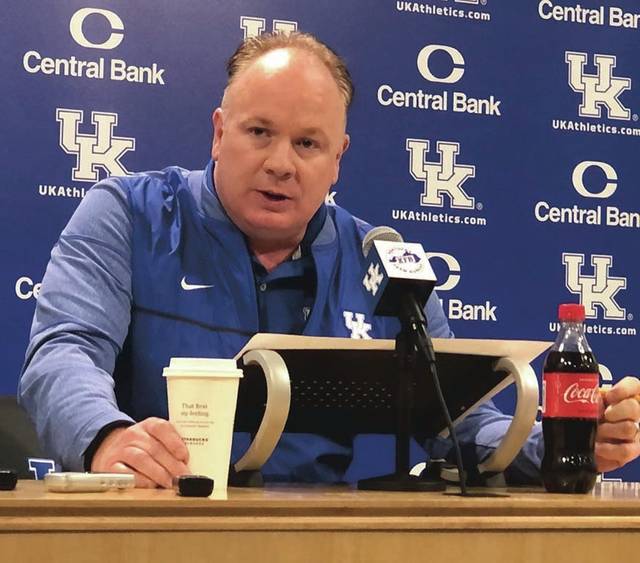 Kentucky football coach Mark Stoops addressed the media Monday. Stoops talked about Tennessee, the bye week and his name being linked to the Florida State opening.

LEXINGTON (KT) — Mark Stoops isn’t looking ahead to the future. The Kentucky coach is focused on the task at hand.

Stoops has been linked to the Florida State opening after former Western Kentucky University quarterback Willie Taggart was fired on Sunday, but the Kentucky coach is more interested in preparing for Tennessee than coaching vacancies.

“It’s something you don’t really want to address in season,” Stoops said. “It’s better than the alternative but, for myself, it’s 100 percent concentration on Tennessee. That’s all I want and that’s all I want our team to focus on. That’s all you can do (and) with success you’re going to have some of that.”

Stoops compared the interest from outside sources as the same kind of attention men’s basketball coach John Calipari receives in a yearly basis.

“Every year he’s going to the NBA, right?” he said. “You just dismiss it and concentrate on the things that you can control. I’m not going to get into speculation, I will talk about the University of Kentucky and Tennessee.”

The Wildcats (4-4, 2-4 Southeastern Conference) are coming off a bye week and a 29-7 victory over Missouri in their last outing on Oct. 26. Stoops said the week off — the second one of the season — was beneficial for his squad.

“I like the way our team has gone about their business,” he said. “Our team had a good week last week and had an opportunity to get healed up a bit and get a head on Tennessee. It was a good week and we’re anxious to get back out there for the crowd this week.”

Although his entire squad enjoyed the week off, Stoops said quarterback Lynn Bowden needed a chance to get recharged after leading the Wildcats to two victories in their past three games.

“Lynn is a guy that handles things so well physically but playing quarterback mentally is very taxing on him,” Stoops said. ‘He has taken a lot of hits, so I think it was good for Lynn, but all of our players (as well). We continued to build on the good things we were doing and maybe areas where we are falling short and look to improve. … It was a good solid week.”

Stoops is hopeful starting quarterback Sawyer Smith can return to the lineup after missing the past three games.

“I think he’s getting closer and closer knocking off all that rust,” he said. “His arm looked stronger toward the end of last week. Hopefully, he’ll come back this week and look really fresh and look good — we’ll see where it goes.”