Bears to face Clay in opening round of 4A playoffs 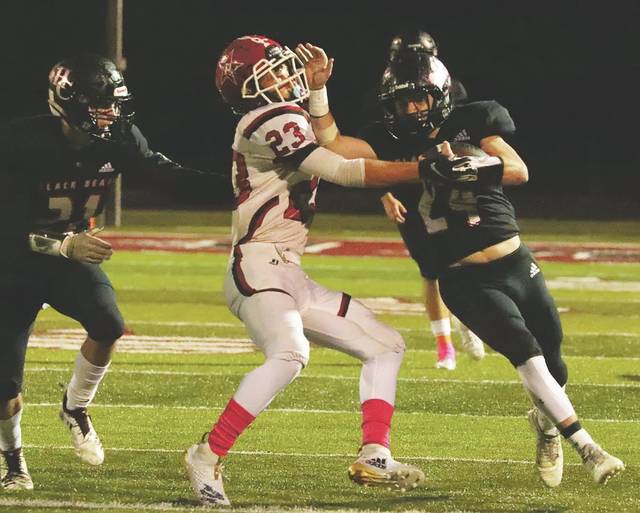 Harlan County senior running back Tyler Casolari battled to break free from a Perry Central defender in action earlier this season. The Black Bears will play host to Clay County on Friday in the 4A playoffs.

If the Harlan County Black Bears needed any motivation for their opening-round playoff matchup against Clay County on Friday, they only have to look back at their game earlier this season during a stormy Friday night in Manchester.

The Tigers and Bears played to a scoreless tie in the first half after a one-hour lightning delay. The game was tied again at 7 before Harlan County scored two late touchdowns on Ben Landis runs to win 21-7.

Both teams bring 7-3 records into the rematch at Coal Miners Memorial Stadium. It was the best season for Clay since 2010.

“Clay has played some really good football this year,” Harlan County coach Eddie Creech said. “They are a huge football team and a very physical squad. They have won seven games for a reason. We were in a dogfight over there and expect nothing less this time around.”

Senior running back Chandler Hibbard has been the Tigers’ top weapon this season with 1,831 yards rushing and 14 touchdowns. He was limited to 78 yards on 23 carries by the HCHS defense.

Senior fullback Deon McCulley has added 144 yards rushing. Senior quarterback Ethan Hacker has completed 42 of 91 passes for 710 yards with 11 touchdowns and no interceptions. Junior receiver Raven Abner is first on the team in receptions with 14 and receiving yards with 258.

Landis has led the Bears with 784 yards rushing going into the final regular season game. Demarco Hopkins and Tyler Casolari have added 341 and 328 yards, respectively. Hunter Blevins and Josh Turner have led the HCHS defense with 64 tackles each.

Harlan County is coming off a 32-14 loss last week at Bell County. The Bears fought back to within 10 late in the game after falling behind 24-0 in the first quarter.

“I felt we left some points on the field against Bell. Costly turnovers at critical points in the game are hard to overcome” Creech said. “We must play clean on offense and play stout defense against their potent offense.”

The winner of Friday’s game at HCHS will likely travel to Johnson Central on Nov. 15 for the District 8 championship. The Eagles will be a heavy favorite in their first-round game against Letcher Central.