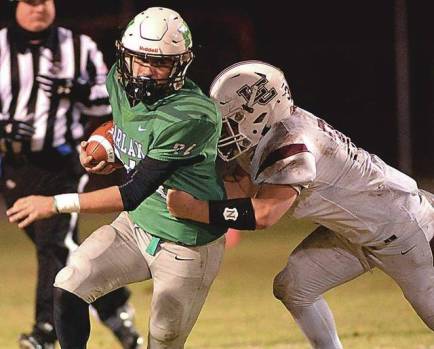 <p>Chris Jones | Harlan Enterprise</p> <p>Harlan’s Ethan Clem tried to break free from a Leslie defender in Friday’s game. Clem ran for 80 yards and scored both Harlan touchdowns in a 28-14 loss.</p> 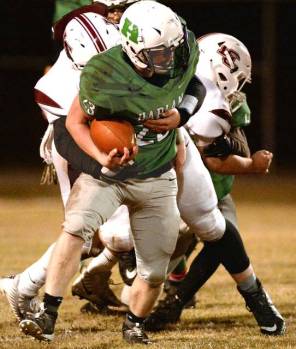 While their record won’t show it, the Harlan Green Dragons demonstrated just how much progress they have made in their regular season finale Friday at home against Leslie County (5-5). The Dragons were within eight points going into the second half and had three drives inside Leslie territory with a chance to tie but came up empty each time as Leslie held on for a 28-14 victory.

Harlan held its own with 204 yards on the ground, compared to 208 for Leslie. The Dragons also led in first downs, 12-11, but had trouble converting on opportunities.

“We just couldn’t push it in,” Harlan coach Eric Perry said. “I thought we played better defensively the second half and were able to run some clock. If could have taken advantage of a couple of opportunities it could have been different.

“I couldn’t ask for much more. Our kids are pretty hurt right now. I was really proud of our five seniors. They left it all out there tonight.”

Both offenses struck quickly on their opening possessions.

A pass interference penalty helped Harlan on its first drive. Ethan Clem broke free three plays later, on a third-and-10 play, for a 42-yard touchdown run. Clem added the two-point conversion for an 8-0 lead with 9:18 left in the first quarter.

The Eagles struck again in the closing seconds of the quarter as quarterback Zack Parker found Alex Farler for a 51-yard touchdown pass. Asher went in for the two-point conversion and a 16-8 lead.

Harlan took 10 minutes off the clock with a 17-play drive that covered 67 yards and ended with Clem’s 9-yard TD run with 2:14 left in the half.

The Eagles answered quickly as Spurlock had runs of 22 and 13 yards in a four-play drive. Asher went in from the 21 with 42 seconds left, extending the Leslie lead to 21-14 at halftime.

Juan Bynum gave Harlan a first down on the Leslie 37 when he ran 38 yards on fourth down after taking off following a low snap when lined up to punt. The Dragons were unable to move the ball.

Harlan drove into Leslie territory once again in the fourth quarter, getting as close as the 30 on a pass interference penalty against the Eagles.

The Dragons worked into Leslie once more midway through the period as a personal foul penalty pushed the ball to the Leslie 39. The drive once again stalled and Harlan was forced to go for it on a fourth-and-long play with two minutes left. After stopping the Dragons on down, Leslie added an insurance touchdown on a. 4-yard run by Spurlock with 17 seconds to play.

Harlan (1-9) will travel to Williamsburg on Friday for the first round of the Class A playoffs.