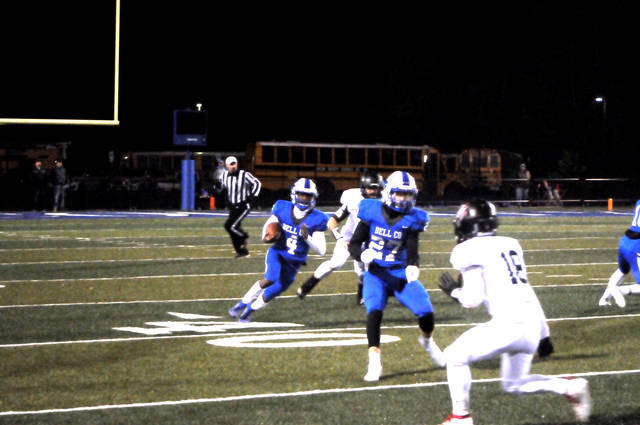 Bell County hosted the Harlan County on senior night Friday in hopes of closing out the regular season undefeated for the first since 2010.

With a hot start on a cold night, Bell County didn’t meet much resistance until midway through the third quarter. However, the damage had been done and the Bobcats were able to down the Black Bears 32-14 and finish out the regular season with an undefeated record of 10-0, prior to hosting Garrard County on Nov. 8 in the first round of the KHSAA class 3A playoffs.

The Bobcats got off to an effective start against the Black Bears, with three of their first five offensive snaps going for touchdowns. Senior London Stephney took Bell County’s opening snap down the field 51 yards for a touchdown to get things started, before a pair of Brandon Baker and Dawson Woolum runs gave the Bobcats a quick 12-0 lead.

Stephney connected with Jason Jones on a 71-yard touchdown pass to give Bell County a more comfortable lead at 18-0. Another touchdown pass from Stephney gave the Bobcats a 24-0 lead, which they held at the half.

Bell County started the third quarter with a takeaway on an interception, setting them up with good field position. However, the Bears’ defense held fast and limited Bell County to minimal yardage, forcing a rare punt from the Bobcats.

The Bears began to fight back midway through the third. After an interception off of a deflected pass, Harlan County was faced with a first-and-goal. On the ensuing play, Ben Landis powered into the end zone for the first Black Bear touchdown of the night, closing the gap to 24-6 after a missed extra point.

After a costly fumble from Bell County that was recovered by Harlan County with 5:12 remaining in the game, the Bears were able to punch in their second touchdown of the night, bringing the score to 24-14 in favor of the Bobcats.

With the Black Bears fighting back, the Bobcats didn’t lay over. Late in the fourth quarter, Bell County was able to punch in their final touchdown of the game, allowing them to secure an 18-point victory over their rival from up U.S. 119.

Bell County closed out the season with a final record of 10-0. Harlan County closes the regular season 7-3 and will host the Clay County Tigers in the first round of the KHSAA 4A playoffs.

The Bobcats play host to the Garrard County Golden Lions on Nov. 8 at Dudley Hilton Field. When these two met in the regular season, Bell County emerged victorious with a 39-0 victory on Log Mountain.