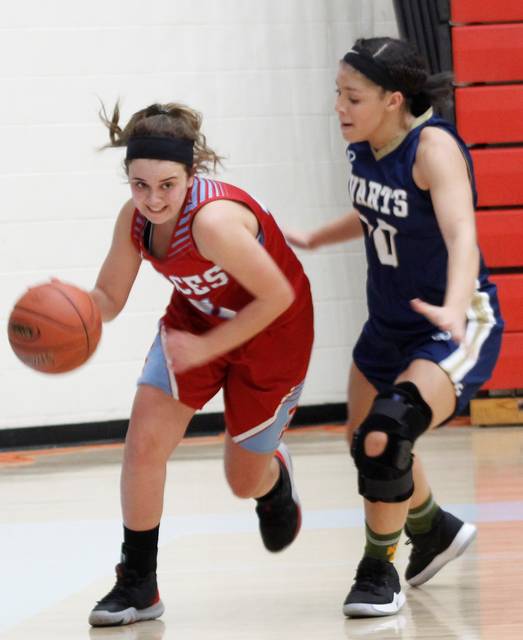 James A. Cawood guard Kylie Jones was defended by Evarts’ Kylie Noe in regular season action. The Trojanettes and Lady Cats advanced to the championship game with semifinal victories Tuesday.

The James A. Cawood Trojanettes used their size advantage and stellar defense down the stretch to keep their perfect season alive as they held off Cawood 31-23 in semifinal action Tuesday at the county seventh- and eighth-grade tournament.

The Lady Comets rallied from a 10-point deficit to briefly take the lead in the fourth quarter, but a strong defensive effort by Paige Phillips and Kylie Jones put the clamps on sixth-grade point guard Cheyanne Rhymer, and Leah Davis and Abbi Fields combined for eight points in the final period to put the game away.

Cawood was led by Rhymer with 18 points.

In the nightcap, Kylie Noe returned from a one-game suspension to pour in 25 points and lead Evarts to a 43-34 victory over Rosspoint.

Rosspoint trailed by three at the half, but Evarts took control with a 12-0 run in the third quarter.

The championship game is set for 7 p.m. Saturday, with the third-place game slated for 5:30.