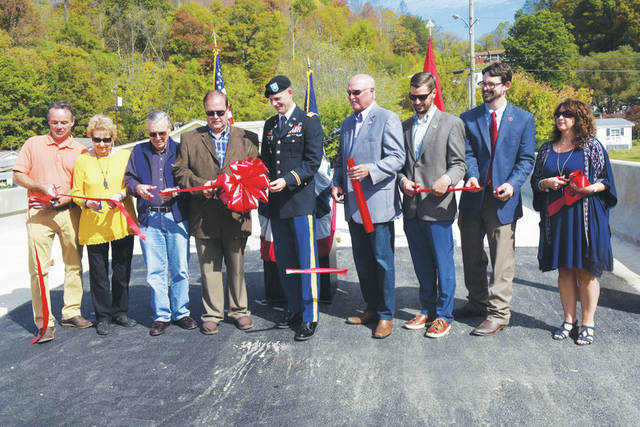 CUMBERLAND — Officials held a ribbon-cutting ceremony at Shepherd Street Bridge over Looney Creek, a milestone for a broader U.S. Army Corps of Engineers Nashville District project to reduce the risk of flooding in the city.

About a year ago, the Corps and contractor Bush & Burchett, Inc., began work on the bridge project. The bridge replacement is part of an ongoing project to widen the channel of Looney Creek to reduce the risk of flooding. This contract replaced the bridge, and made other pavement improvements on Main Street. They also demolished the Salt Building north of the bridge, improved the storm sewer system, and relocated utilities impacted by the bridge replacement project.

“The channel widening is going to reduce flood risk,” Toole added. “You can definitely make it harder on mother nature by doing things like this, preparing for that eventual flood that will happen.”

The bridge is expected to open to traffic in the coming weeks once the concrete is fully cured and sealed, and striping is painted on its surface.

Jeff Wilder, president of Cumberland’s Chamber of Commerce, relayed appreciation from Mayor Charles Raleigh, who couldn’t attend the event, but diligently administered the project and wanted to pass along his gratitude.

“The mayor said, ‘This construction crew is the best I’ve worked with. There is nothing that I’ve asked of them that they have not complied with. These Army Corps projects are very important to this town and I look forward to the next phase,’” Wilder reported.

The city of Cumberland cost shared this project with the federal government, which totaled $1,691,032 for the construction. Future work is projected to remove additional structures along Looney Creek and to widen the channel downstream of Shepherd Street Bridge.

Sen. Johnny Ray Turner, Kentucky 29th District, who sits on the state’s standing committee for transportation, said the new bridge and future demolition and channel work is going to make a great difference in Cumberland and open the city to economic development.

Turner said it’s important to work with the Corps of Engineers and local authorities to reduce the risk of flooding regionally.

Nashville District Project Manager Mike Lee and the contractor’s Project Manager John Ward were in attendance as the community celebrated and officials lauded the work of their teams to construct the bridge and widen the channel.

Paul Browning, Harlan County Fiscal Court District 3 magistrate, passed along kudos from Harlan Judge-Executive Dan Mosley, and noted how this project represents positive “change and transformation” for the community, as it appreciates its historic mining heritage but continues to evolve into the future.

“As we go forward, we will have change and transformation. This will be the earmark. This will be the definition of what we will try to do together locally, on a county level, on a state level, and on a national level,” he said. “We have to come together and embrace change and transformation as we go forward looking for new ideas, new ways to feed our families, ourselves, and keep our communities alive.”

Browning said the bridge represents new history, one that builds on efficiency. The old bridge was no longer functioning properly with the flow of the river. The bridge is a welcome change and the channel widening downstream will continue to transform the landscape of the city, he stressed.

The Corps of Engineers has been working throughout the area for decades to reduce the risk of flooding since the flood of 1977 ravaged towns, and communities were forced to rebuild and prepare for future floods. The work along Looney Creek, which meets the Poor Fork of the Cumberland River, is designed to provide a greater level of protection for property and public safety.

In recent years, the Corps completed projects to widen the channel of the Poor Fork of the Cumberland River and replaced the Blair Street Bridge as part of the Looney Creek channel widening.

“I want to thank the Corps of Engineers for this project, a beautiful new bridge,” Bowling said.