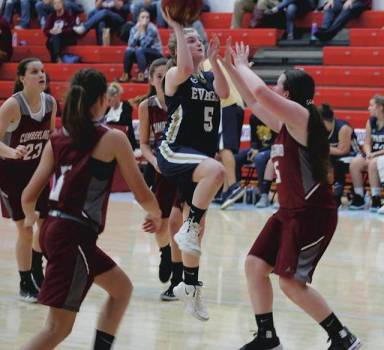 <p>John Henson | Harlan Enterprise</p> <p>Evarts guard Ashley Preston sailed toward the basket for two of her 18 points in a 45-29 win over Cumberland on Saturday in the seventh- and eighth-grade county tournament.</p> 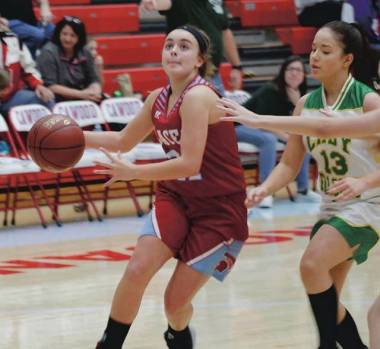 The top three seeds moved on with wins Saturday in the first round of the county seventh- and eighth-grade tournament at James A. Cawood.

Two nights after leading Cawood to a fifth- and sixth-grade county title, Cheyanne Rhymer broke a tie by scoring all nine points in the third quarter to spark the Lady Comets in a 33-20 win over Wallins. Rhymer finished with 25 points as the Lady Comets, seeded fifth, pulled off the only upset of the day.

Jenna Wilson hit six 3-pointers in a 21-point effort as third-seeded Rosspoint advanced with a 37-16 win over Black Mountain in the opening game.

Top-seeded James A. Cawood grabbed a big lead early on the way to a 46-12 win over Green Hills. Paige Phillips led the Trojanettes with 16 points.

Evarts, seeded second, held off an upset bid by Cumberland to win 45-29 in the final game. Ashley Preston scored 18 points and Drucilla Brown added 10 for the Lady Cats.

The semifinals are set for Tuesday as JACES takes on Cawood at 5:30 and Evarts meets Rosspoint at 7.