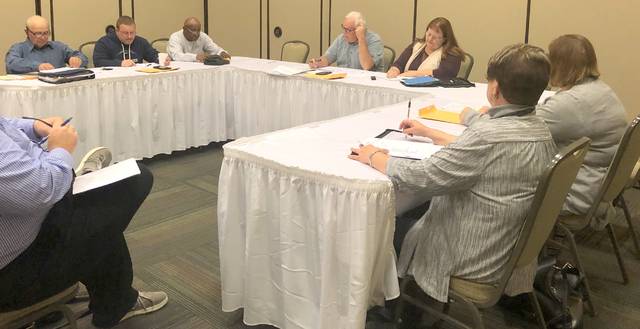 Harlan Mayor Joseph Meadors spoke briefly on Monday of the resurfacing funds the city received on Oct. 12 from Kentucky Governor Matt Bevin, saying the city didn’t receive funding for new sidewalks but will likely reapply for such funding in the future.

Harlan Mayor Joseph Meadors discussed the amount of money the city of Harlan received on Oct. 12 from Kentucky Governor Matt Bevin to aid with bridge and road repairs. Meadors talked with Harlan City Council members on Monday to officially announce the funds.

Meadors told the council the city didn’t receive funding for new sidewalks, “which is what I really wanted.”

Meadors added he believes the governor’s office will most likely award funding for sidewalks separately and the city would need to submit another request for funding.

“These are called discretionary road dollars and they are. But they’ve often been used, as alluded to, for political reasons to award funds to certain people or help certain people or buy certain influencers. That’s not how it should work. While it’s called the Governor’s Discretionary Road Fund, it’s your money and you’re just getting your own money back. You should never have to thank Frankfort for giving your own money back.”

“That’s $223,189 coming because of your judge-executive and your fiscal court sitting down and telling us their needs,” Bevin said. “And then specifically, to the city of Harlan, another $103,000 for two projects. One, resurfacing River Street, that’s $90,000. Some of you nodding your heads know that’s been needing done for a while, so again, to those of you at the local level who made us aware of this, we’re grateful to you. The final project is some patching on Central Street.”

Bevin said the roads were prioritized based on safety and economic development possibilities.

• approved the minutes of the previous meeting;

• approved the bills and payables;

• reviewed the success of the Harlan County Bicentennial Festival, which took place Oct. 10-12;

• opened and awarded the utility franchise bid to KU for a 10-year period for 3 percent, with the option to increase to 5 percent;

• heard the police report for the month of September, which reported less calls, $3,750 made from the city auction, two arrests for intoxication during the bicentennial celebration and more officers on duty for the candidate stump speeches and parade;

• heard the fire report for the month of September, which reported nine commercial inspections, three family dwelling inspections, 50 man hours of training, seven responses, two fire alarm responses, one brush fire, one electrical panel fire and one medical assist. The department head also announced the seasonal burn ban was set in place and no fires can be made within 150 feet of the woodlands and between 6 p.m. to 6 a.m.