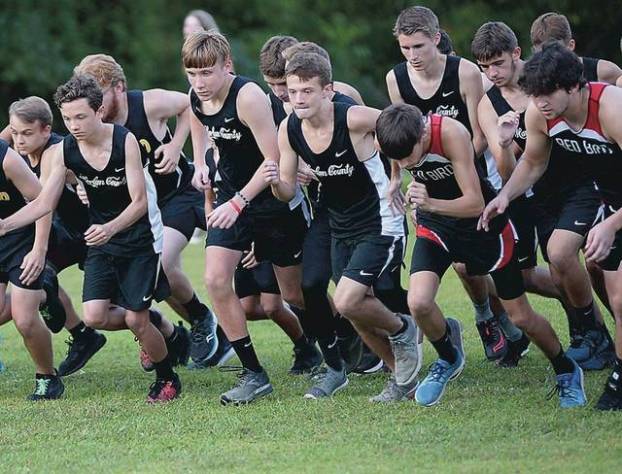 The Harlan County boys team, pictured in action earlier this season at the starting line, won the Area 9 championship on Saturday.

The Harlan County boys cross country squad put the finishing touches on an impressive regular season with another win at home Saturday in the Area 9 Championship Meet.

The Bears won despite being without some varsity regulars, including junior Caleb Brock.

“I’m very proud of the effort these boys gave today,” Harlan County coach Ryan Vitatoe said. “To come into this race missing two of our top three guys and come away with the win is impressive. I challenged them throughout the week that everyone was going to have to step up. We talked about the importance of our pack being solid, and they were perfect with that today. It was a solid team effort.”

Middlesboro’s Ozzy Norris was the individual winner with a time of 18:08.84.

“I’m also proud of the girls for their effort as well,” Vitatoe said. “Five of the seven girls ran either her season best or a PR. We came up short on our goal, but you can’t be upset with that type of effort.”

Middlesboro’s Mallory James won the girls race with a time of 21:05.38.

“I was also pleased with our middle school kids,” Vitatoe said. “These younger kids come to each practice and work as hard as our high school kids without nearly the same amount of recognition or accolades. They give it their all every day, and I’m excited about the future of the program based on what I’m seeing.”

“I’m also very proud of our elementary boys for winning Area 9 as a team,” Vitatoe said. “These guys have worked hard this season and they ran great today. Our elementary girls were also solid.”

The elementary and middle school teams will participate in the Meet of Champions in Lexington on Saturday. The varsity team will return to action Oct. 26 at Wayne County in the Class 3A Region 7 championship meet.

LEXINGTON (KT) — Mark Stoops put the ball in Lynn Bowden’s hands and the Wildcats ran with it, ending a... read more