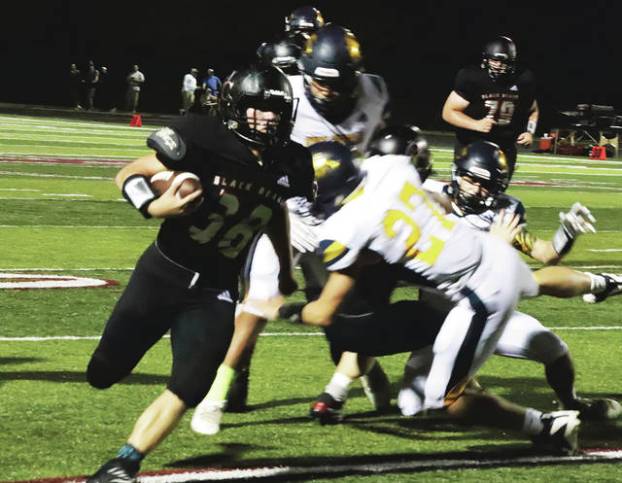 Harlan County senior running back Ben Landis ran for 159 yards on Friday as the Black Bears rallied for a 28-21 win over Knox Central.

HCHS rallies for win over Knox

Down 21-0 after one quarter Friday against visiting Knox Central, the Harlan County Black Bears reeled off 28 unanswered points for a 28-21 win to break a five-game losing streak against the Panthers.

Senior tailback Ben Landis sparked the comeback behind a strong performance from the HCHS offensive front, turning the momentum in the Bears’ favor by taking control of the line of scrimmage. Landis finished with 159 yards on 27 carries.

Landis had six carries in a 10-play drive to open the second half that ended when quarterback Jacob Wilson went in from the 1 on fourth down. Jordan Steele’s extra point cut the KC lead to 21-14.

The Bears started the go-ahead drive on the last play of the third quarter. Matt Brown caught a 60-yard pass on a fly route to set up another 1-yard TD run by Wilson with 9:53 to play. The Bears went for two and Matt Brown converted to make the score 22-21.

With quarterback Brady Worley leading them down the field, the Panthers faced a third down on the HCHS 6 when Steele knocked the ball away from Worley. Junior linebacker Hunter Blevins, who had a huge second half, scooped the ball up and rumbled 85 yards for a touchdown. Steele missed the extra point, but the Bears led by seven with 3:35 left.

A long kick by Steele backed up the Panthers and HCHS appeared to have the game won when.a fourth-down pass fell incomplete. A late unsportsmanlike conduct penalty kept the drive alive and the Panthers drove to the HCHS 32 before the Bears held on fourth down in the closing seconds.

Knox dominated the first quarter, collecting 144 yards on the ground and 90 through the air, most coming on a 75-yard pass from Worley to Abram Brock on the opening play. Worley rolled out on the play and found Brock on a crossing route. Zach Blevins’ extra point put the Panthers up 7-0 only 20 seconds into the game.

Harlan County followed with a 10-play drive that ended on the Bears’ 43. Knox needed only one play to score again as Zach Mills took a pitch in his end zone and beat the Bears to the outside on the way to a 96-yard score. Blevins’ extra point pushed the lead to 14-0 with 4:44 to play in the first quarter.

Knox Central (1-3) scored again when Seth Huff capped a nine-play drive with a 3-yard run. Blevins’ extra point made the score 21-0 with 15.9 seconds left in the period. HCHS assistant coach Chad Wood received two unsportsmanlike conduct penalties on the drive and was ejected after arguing with officials.

Harlan County’s offense finally broke through with an eight-play, 55-yard march that ended with Matt Brown’s 10-yard touchdown run. Steele’s extra point cut the deficit to 21-7 with 9:43 left in the opening half.

Smith must step up with Wilson injured

While it was heartbreaking to see quarterback Terry Wilson’s season-ending injury during Kentucky’s win over Eastern Michigan last weekend, I... read more