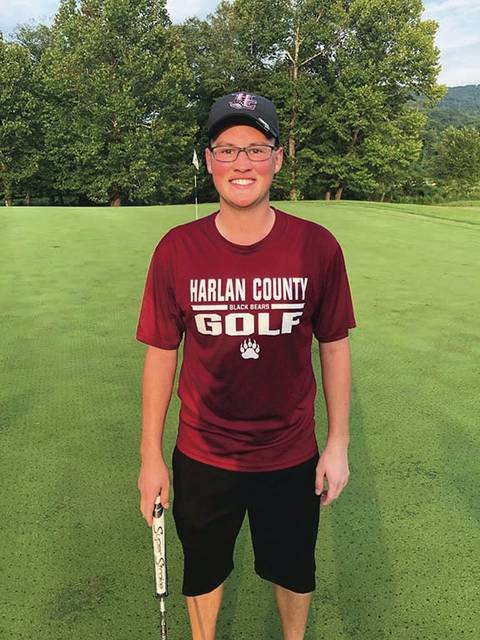 Harlan County senior Caleb Ashley lost to Middlesboro’s Tyler Harris in the second hole of a sudden death playoff in a three-team meet Thursday at the Wasioto Winds course in Pineville.

Ashley shot a 38 and finished second after the playoff. Matt Lewis was next for HCHS, shooting a 45 to place sixth. Alex Creech was ninth with a 48 and Caleb Rose was 13th with a 68.

“Caleb Ashley’s game is getting sharper and sharper with every match we play,” said HCHS coach Greg Lewis. “He got a bad break on a tee shot that hit something in the middle of the fairway and kicked into a penalty area or he would have won the match outright. He has been in the top five in five events this year and could easily have three wins. He is peaking at the right time as the regional tournament gets closer. I am also very excited for Caleb as he will be representing HCHS as a participant in Pebble Beach as part of the First Tee’s Pure Silk event. He is a very talented golfer but an even better young man.

“Matt and Alex again played well. Matt hit the ball very well. He has been working on a few things with his driver and it paid off today. He was very long and straight off the tee. He hit a couple shots in a few places that made it tough to make par, but he played much better than his score showed. Just like Caleb, he is coming into form at the right time. Alex had his best score of the year for us. He hit his driver very well and continues to be very good around and on the greens. Caleb Rose played his first high school event with us tonight. His scores don’t show the amount of work he has put in on his game. He has worked extremely hard to get his scores low enough to qualify to play.”

Ashley finished third with a 37 to lead the Bears in a five-team tournament on Sept. 3 in Pineville. Bell County’s Andrew Caldwell was the medalist with a four-under par 32.

“Caleb turned in a great score at plus one but even that score wasn’t indicative of the way he played. This was one of his best rounds of the year,” Lewis said. “He made a couple three putts and caught a flyer which cost him a few shots and a chance for his second win of the season. He made four birdies and should have been tied with Drew or a shot or two ahead.”

Ashley was fifth with a 38 in a six-team tournament on Aug. 20 in Pineville. Lewis shot a 42 to place seventh, and Creech finished with a 48 to place 17th.

“All of my guys played really well,” Lewis said. “Caleb was a couple of untimely bad shots away from contending for another win. By the time region gets here, he is going to be a definite contender for HC’s first regional champion. Matt struck the ball very well. He drove it great and putted very well. He ended up in a couple bad spots after good shots that cost him a few strokes. He continues to improve every time out. I look for him to start reaching the top five in these events very soon. Alex is learning and improving every time out. His chipping and putting have been outstanding. Once his strength catches up with his ability he is going to start putting up some really good numbers.”

Visiting Phelps built a 21-2 halftime lead and then had to hold on in the second half as Harlan battled... read more