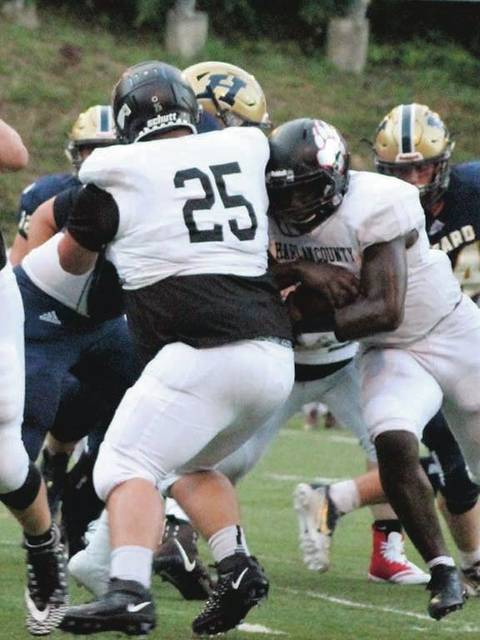 Harlan County running back Demarco Hopkins followed a block from Braydon Shanks as he picked up some tough yardage in last week’s 22-20 win at Hazard. Hopkins ran for 71 yards on 14 carries, part of the Bears’ 212-yard effort. Harlan County will play host to Martin County on Friday.

With a name change from Sheldon Clark High School to Martin County High School when a new school opened this summer in Inez, the Cardinals are trying to end a 10-year run of losing seasons and are off to a good start coming into Friday’s game at Harlan County. Martin County opened with a 56-12 win at Betsy Layne, then defeated visiting Magoffin County 22-6 on Friday.

With Jim Matney as coach in the 1990s, Sheldon Clark was one of eastern Kentucky’s top programs at one time but has fallen on hard times recently with three straight two-win seasons.

“They resemble some of the older teams from over there as far as being physical and playing ground and pound,” Harlan County coach Eddie Creech said. “They will present a challenge to us in terms of physicalness and toughness. This game may not last long as far as time goes because we both have a run-first approach.”

Senior tight end/quarterback Drake Muncy and junior fullback Branson Smith lead the Cardinals, who haven’t posted a winning season since finishing 9-5 and advancing to the state semifinals in 2009.

Harlan County (2-0) opened with a forfeit win over Harlan before battling through a 22-20 victory Friday at Hazard as junior linebacker Gavin Ewald’s safety late in the game proved to be the difference. The Bears had 71 yards in penalties, an area Creech would like to see improve.

“Penalties is an area that needs some cleaning up, but that is usually part of a first game.,” he said. “We had some ugly spots in the Hazard game with some mental mistakes, but we will put the work and time in to improve on those areas. I was very proud of our guys being in the shape they were at Hazard. We have had two scrimmages and a full game without a simple cramp. That is a testament to the kids’ effort during conditioning time and also their preparation of fueling their bodies properly prior to games.”

The Bears had success on the ground last week with 212 yards, led by junior halfback Matt Brown with 72 yards on six carries and junior fullback Demarco Hopkins with 71 yards on 14 carries.

For the second straight week, the Harlan Green Dragons will be at home against an opponent that has struggled for... read more