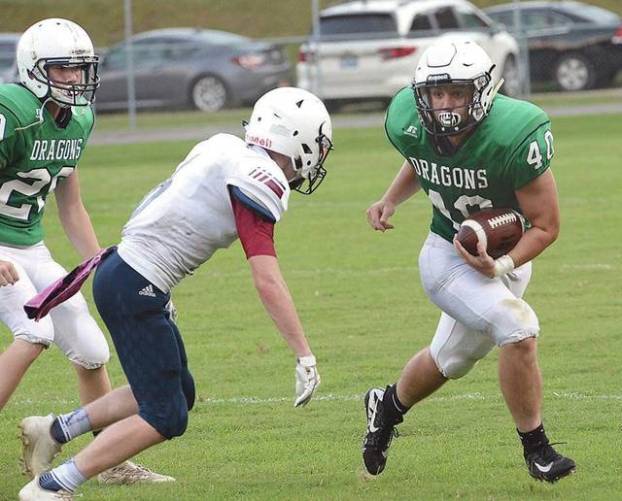 Harlan running back Tristan Cochran looked for running room in a scrimmage against Knott Central. The Dragons were limited to 93 yards rushing last week in a 21-7 loss to Berea. Harlan returns to action Friday at home against Phelps.

For the second straight week, the Harlan Green Dragons will be at home against an opponent that has struggled for much of the century but appears to be much improved in 2019.

Berea, losers of 43 straight until winning its last game in 2018, improved its record this season to 2-0 on Friday with a 21-7 victory at Harlan. Phelps, this Friday’s opponent, hasn’t posted a winning record since 1998 but was much improved last year with a 5-5 mark under former Belfry and UK standout David Jones. The Hornets welcomed back seven starters on both sides of the ball this season and opened with a 47-6 victory over East Ridge.

Jones left for Bourbon County after last season and former assistant Andrew West took over as head coach. He is working to build on the progress of the last two years.

“They don’t seem like they’ve missed a beat. It’s pretty much the same scheme, and the guy does a really good job,” said Harlan coach Eric Perry. “They have a lot of the same players as last year. They are pretty good up front and have a kid with some pretty good speed. Defensively, they play a 50 and are pretty skilled. Their schemes are similar to Belfry, where David Jones played. It will be a tall task for us.”

Harlan’s biggest problem last week was finishing drives. The Dragons came up empty on four trips inside the Berea 20 after scoring early in the game on a 13-yard run by Ethan Clem.

“We’ve got to be able to move the ball and sustain drives,” Perry said. “We’re not going to change a bunch of stuff. We have to get better at what we do, and I think we will get better as the year goes on. We have to be patient with it.”

The Dragons were limited to 93 yards on the ground last week, but made some athletic plays that gave them scoring opportunities. Juan Bynum, a sophomore running back, set up Harlan’s only touchdown with a 70-yard kickoff return in the first quarter. Bynum also pulled down a high snap on a punt attempt and was able to avoid falling out of the back of the end zone before picking up a first down with a run covering almost 40 yards. Junior receiver Jeremiah Mills fielded a missed field goal in the end zone and almost took it all the way back, running 78 yards before being stopped.

With Connor Scearse slowed by a shoulder injury, Shane Lindsey made the start at quarterback on Friday. Scearse took over in the second quarter, but Lindsey returned in the final period with the Harlan offensive line struggling to stop penetration by the Berea defense.

“Connor is still banged up a little bit. We’ll go with both again and see what happens,” Perry said. “I thought Shane did fine. He won’t be flashy, but he takes care of the football and runs our offense well. We’re fine with both of them. It will probably turn into a pretty decent competition.”

Sophomore linebacker Tristan Cochran and senior lineman Jordan Howard are both doubtful for Friday’s game due to injuries.

Pruitt says Vols must ‘look in the mirror’

KNOXVILLE, Tenn. (AP) — Tennessee coach Jeremy Pruitt says he still has faith in his team as it attempts to... read more