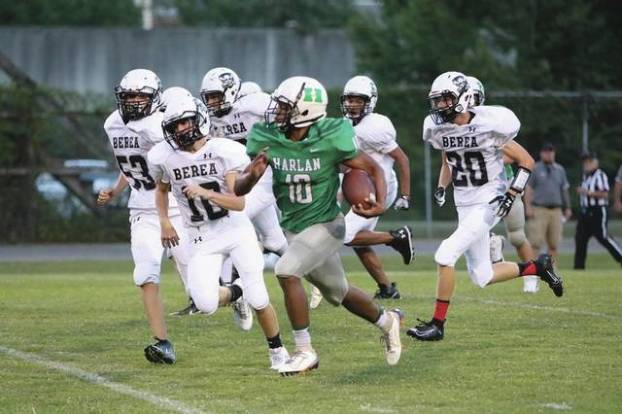 Juan Bynum returned a kickoff 70 yards in the first quarter of Friday’s game against visiting Berea, setting up the Dragons’ only touchdown in a 21-7 loss.

Berea pulls away for win over Dragons

Eric Perry knew there would be no overnight fixes when he took over as the Harlan football coach last spring, coming off a 4-7 season with a roster all but wiped out by graduation.

The Green Dragons gave a good effort in their season opener Friday but came up empty on four trips inside the Berea 20. The missed opportunities proved to be the difference as the visiting Pirates improved to 2-0 with a 21-7 victory behind the 1-2 backfield combination of senior quarterback Jaylen Whitaker and sophomore running back Jaiden Cunningham.

“I thought both teams played not to lose. I thought both teams played tight,” said Berea coach Aaron Stepp, whose Pirates improved to 2-0 and won for the third straight time after ending a 43-game losing streak last fall. “I know they had some quarterback issues, and I thought it was odd some of the mistakes we were making. (Harlan coach) Eric (Perry) is doing a great job over here. I said at halftime that this was a dogfight, and they are not going away. They wouldn’t lay down, and that’s a testament to leadership and coaching. It was a heck of a football game.”

“We had plenty of chances,” said Perry following his first game as the Dragons’ head coach. “We’re just now where we need to be on offense. Our kids know that. Our Achilles heel is our offensive line. I said our other Achilles heel was our linebackers, but I feel a little better about that now. We have a long way to go offensively. I had three kids in the weight room when I got here, and we’re just physically not very strong.”

Cunningham ran for 107 yards on 18 carries and scored two touchdowns to lead the Berea offense. Whitaker added 100 yards rushing and a touchdown on 15 carries with a touchdown. He also completed 11 of 18 passes for 51 yards.

Berea drove 82 yards in nine plays in the game’s opening series, aided by three Harlan penalties. Cunningham picked up 18 yards and Ty Thompson had a 19-yard catch to set up Cunningham’s 1-yard run on third down with 6:59 left in the opening period. Sean Fagin hit the extra point for a 7-0 lead.

Harlan answered quickly with the help of a 70-yard kickoff return by Juan Bynum to the Harlan 15. Ethan Clem scored two plays later on a 13-yard run. Bynum’s extra point tied the game with 5:06 left in the first quarter.

Fagin went for a field goal from the 35 but it fell well short. Mills fielded the ball midway in the end zone and returned it 78 yards to set up the Dragons at the Berea 27. A pass interference penalty gave the Dragons a first down on the 11, but the drive stalled as Clem was stopped on the 4 on fourth down.

Senior lineman Jordan Howard gave the Dragons another chance when he recovered a fumble on the Berea 14. Bynum went 10 yards on the next play, but fumbled two plays later and Clayton Martinez recovered on the 1.

A high snap to Bynum on a punt set up the second Berea score, a 5-yard run by Cunningham late in the first half. Fagin’s second extra point gave the Pirates a 14-7 halftime lead.

A 10-yard touchdown run by Whitaker with 6:21 left in the game, followed by Fagin’s extra point, closed the scoring. Berea drove 29 yards in six plays after Joe Collins recovered a fumble.

Harlan returns to action Friday at home against Phelps. Berea plays host to Caverna on Friday.

With their opportunities limited by a ball-control Cumberland offense that took just under 11 minutes off the clock in the... read more