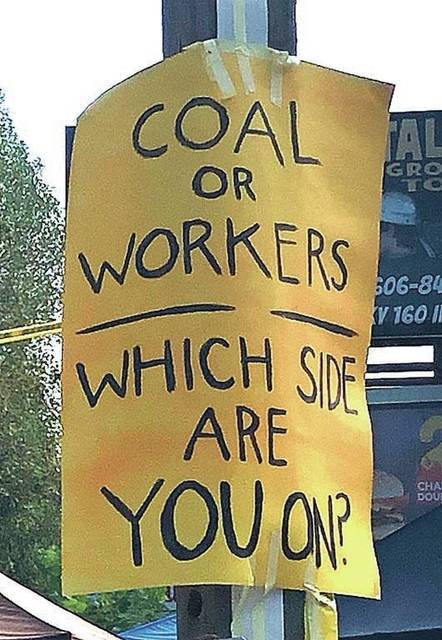 Miners continue protesting despite a court hearing in Charleston, W. Va., on Friday when Blackjewel representatives filed a 13-day emergency pleading stating the court should grant them permission to move the coal because it is “oxidizing” and “losing value.”

During a bankruptcy court hearing on Friday that was left unresolved, Blackjewel representatives argued to the judge that the coal sitting on the train tracks in Cumberland couldn’t fall under “hot goods” because the coal was sold before the company filed bankruptcy on July 1. The coal was sold for $1.4 million from the company to Blackjewel Marketing and Sales, which is owned by the same group of people, causing a hot debate in the court room.

Attorney Ned Pillersdorf announced on Facebook Wednesday night that there will be an “interesting” hearing at the bankruptcy court in Charleston, W. Va., Friday at 10 a.m.

“On the docket are the ‘hot goods’ pleadings filed by the Kentucky Department of Labor,” Pillersdorf said. “The ‘hot goods’ are actually the $1.4 million worth of coal still sitting on the train tracks that have not been moved since our miners took a courageous stand and blocked the tracks.”

Representatives from the Kentucky Department of Labor attended the hearing to try and keep the coal from being moved, stating the coal would remain under the category of “hot goods” until the workers who mined the coal are paid. Blackjewel’s contract of $1.4 million used to sell the coal, however, does not cover the approximately $4 million alone owed to the miners associated with the coal mined.

Blackjewel Marketing and Sales, the company which is supposed to receive the coal per Blackjewel’s contract, also did not file with the Kentucky Secretary of State Office until July 31 — only a day after laid-off miners began protesting on the tracks to keep the coal from leaving Cloverlick Mine No. 3. These findings are evidenced by Kentucky Secretary of State Online Service’s records of filings and information.

As a way to expedited permission to move the coal, Blackjewel filed a 13-page emergency pleading stating the coal sitting on the tracks is “oxidizing” and “losing value.” No pleadings have been filed to demand the miners removal from the tracks.

The federal bankruptcy court judge ordered a testimony be presented from an expert concerning the oxidation of coal and to present a timeline discussing how long the oxidation process actually takes.

Blackjewel’s attorney also stated if they issues were to remain unresolved, multiple other companies would be hurt as a result, including Kopper Glo Mining — the company purchasing Blackjewel’s assests. The attorney said Kopper Glo might not be able to close the sell if the issues persist.

So far, the issue of whether the coal should be classified as “hot goods” or not continues to be batted back and forth in the courtroom because past laws and cases support both arguments, including Chao vs. Hospital Staffing Services.

In the Chao vs. Hospital Staffing Services case, a secretary of labor in a district court in Tennessee also filed a suit seeking an injunction to prohibit the trustee of a bankrupt corporation then undergoing liquidation in the court from moving in the southern district of Florida from moving in commerce certain records that the secretary deemed “hot goods.” The workers who produced the records for the corporation had also not been paid in accordance with the minimum wage and overtime provisions of the Fair Labor Standards Act (FLSA).

For complete documentation on the Chao vs. Hospital Staffing Services, visit casetext.com/case/chao-v-hospital-staffing-services-inc.

Though Blackjewel claims it’s not in violation of FSLA, the Kentucky Department of Labor insists the coal in mention is protected under the “hot goods” category because the miners were not paid for mining the coal.

According to the U.S. Department of Labor, the FLSA prohibits the shipment, offer for shipment or sale in interstate commerce, of any goods produced in violation of the minimum wage, overtime pay, child labor or special minimum wage provisions. In the absence of an employer voluntarily correcting the violations, the Wage and Hour Division may seek to restrain the shipment of the goods (e.g., not allowing the manufacturer to ship the goods to the wholesaler).

The federal bankruptcy judge ruled that the issue will require an evidentiary hearing in 10 to 14 days. No decisions about the coal can be made until after the hearing takes place.

“You can have the coal, when you pay the people,” Harlan County Judge-Executive Dan Mosley said regarding the court hearing. “Any judge that would allow them to have that coal right now, considering what has not been paid to these individuals, I’d probably not hold back on that one. If he does, we’ll try to seek some type of federal injunction, quickly, to try to stop him.”

Mosley said the case against Jeff Hoops and his father and Lexington Coal is still pending and “it could go on for years, to be frank.”

Mine safety expert Daven Hoskins, with Kentucky Employers’ Mutual Insurance, along with his colleagues, presented a check of $10,000 to... read more