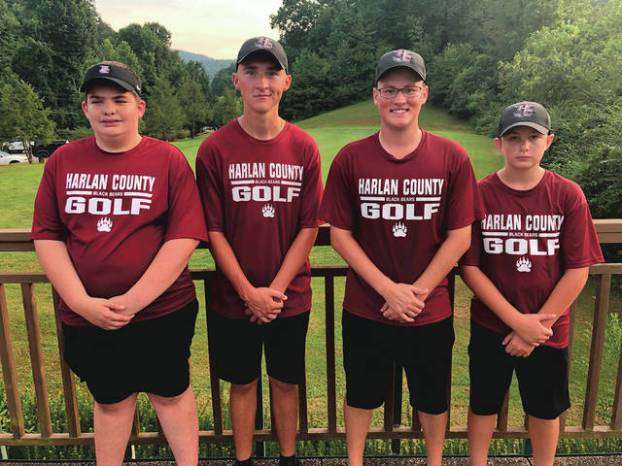 Greg Lewis grew up as a baseball player, at least until a shoulder injury in college derailed his career. He found golf at that point and has never turned back. Lewis is working to introduce the sport to others as the new golf coach at Harlan County High School.

“I fell in love with the game,” said Lewis, who has served as an assistant with the HCHS golf program in two stints before taking over as the head coach.

“I’m pushing these guys hard during the season and they are responding well,” Lewis said. “I’m seeing progress every time they tee it up. We will grow this season and then we will have a chance to implement a summer program of workouts — First Tee, summer tournaments, etc. I am confident that we can do well this year but I really see the future of Harlan County golf looking up. I can confidently say I see individual and team regional/state success for this team in the very near future.”

Lewis has only four players on his first team, but he expects to see that number grow.

“We are a very young team, but we have a ton of young talent,” Lewis said. “But even more importantly than that, I have a really good group of kids. All four of my guys are honor students. They are stars in the classroom as well as on the course. This year we will have some individual success but we are definitely building a solid core of young golfers over the next five to six years. We have a tough schedule against some good talent, which will be good to develop the confidence of my guys. I don’t think we get better playing against teams we can easily beat.”

Caleb Ashley is the team’s only senior and most experienced player. He opened the season by winning a tournament at the Wasioto Winds course in Pineville.

“Caleb has been a part of the golf program for several years and is a very good golfer. He is consistent in all parts of his game. He is a very smart young man and knows how to play his game,” Lewis said. “He gets the best out of his game. He has always been a good iron player. Now he is starting to add some distance after a tweak we made to his swing and his short game is getting better every time out. I look for Caleb to have a great year.”

Matt Lewis and Caleb Rose, both freshmen, are off to a good start with the sport.

“Matt is long off the tee and is very good around the greens. Once he gets the consistency with his iron and wedge game, he is going to win some events. He is starting to learn how to work a golf course for angles, avoiding trouble. He is also a very hard worker. I don’t know that I have anyone who puts as much time and effort into their game as Matt. Heis going to be the guy to lead this team for the next few years! I expect a lot of good things from Matt for many years to come,” Lewis said. Caleb is probably our least experienced competitive golfer. He has really put in some work and his ball striking has improved steadily over the last year or so. He is a willing learner and wants to improve. His confidence on the competitive side of the game is something that will come with time. He is another young man who I think can really help this program for years to come.”

Alex Creech, a seventh grader from Cumberland who is also a standout baseball player, is learning quickly.

”I have been very impressed by his natural athleticism. He is putting up some good numbers before we ever get a chance to really work on his swing. Once we get a few changes made to his swing, Alex’s scores are really going to start dropping,” Lewis said. “Like Matt, Alex is one of the guys I look to put up some good numbers and win some events very soon. As he grows and fills out, he is really going to be a name to watch for in Kentucky high school golf.

Player of the Week to be announced during football season

Football season is always a welcomed time of the year. It’s a sign that fall is on the way and... read more