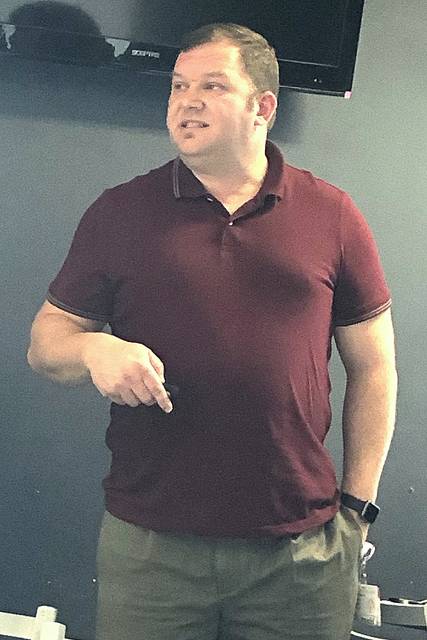 Dr. Stanley Marlow, associate director of internal medicine residency at ARH, attended the Harlan County Chamber of Commerce meeting on Wednesday as a guest speaker. Marlowe presented information regarding residents and their mission in the residency program.

Marlowe said the residency program is a dually accredited program, allowing training for MDs. Marlowe added an inaugural class began on July 1 for a three-year program in internal medicine.

“Our mission is to inspire them to be ingrained in the community,” Marlowe said about the residents. “We expect to train general internists that utilize critical thought.”

Marlowe said residents are required to complete a continuity clinic, which can be completed at the Cloverfork Clinic in Evarts. Residents will be able to accept and follow-up with patients for the duration of their three years. Dr. Anya Cope would also evaluate the patients to make sure their treatments are being met.

Residents are also required to complete “call shifts,” where they work for nearly 24 hours learning to juggle multiple patient calls at a time. Marlowe said it is ARH’s hope that by year three there will be enough residents to be available around the clock instead of only an ER doctor at night.

“At the end of their third year, they should be able to do everything a regular doctor can do, including prescribing medicine,” Marlowe said.

Marlowe said there are differences between a medical student and a resident. According to Marlowe, a medical student is enrolled in medical school, is not yet a physician, is in a non-paid position, are more restricted and they wear short, white coats. Residents, on the other hand, are graduates of an accredited medical school, are physicians in training, are in a paid position, work toward progressive autonomy and wear long, white coats.

“In the Harlan ARH hospital, nine students will be in OMS III and six more on audition rotation and other OMS IVs,” Marlowe said. “We also have another residency program in Whitesburg and we’re working toward having one in Pineville.”

Marlowe said the community can benefit in many ways from the program. Quality outcomes include closer monitoring of hospitalized patients and physicians 24 hours per day both in-house and on weekends. Marlowe estimated that each new physician brings around 1.3 million dollars per year to the local economy.

“I think this is a great opportunity for us to strut our stuff and try to keep some of these physicians in Harlan,” said chamber member Anne Hensley.

Marlowe said the community can help by promoting Harlan when interacting with the students/residents and assisting with housing needs, if possible. He also asked the chamber to “keep us in the loop of things that the community has to offer.”

• Gala committee members met after the chamber meeting to discuss updates of the upcoming event and plan the theme and awards. The gala is slated to occur in October with the date to be determined;

• The chamber was presented an event called Invest 606. The contest is a business accelerator and pitch contest with a grand prize of $10,000 and over $30,000 in awards. To learn more and apply, visit www.invest606.com;

• Two job fairs were announced: one on Aug. 20 at the Letcher County Recreation Center in Whitesburg and the other on Aug. 21 at the Harlan Center in Harlan. Miners impacted by Blackjewel’s filing for Chapter 11 bankruptcy are invited to attend;

• An Ice House Entrepreneurship Program will take place at the SKCTC Harlan Campus on Aug. 26, Sept. 3, Sept. 9, Sept. 16 and Sept. 23 from 5:30 until 7 p.m. For more information and to register, go to www.icehouseharlan.eventbrite.com