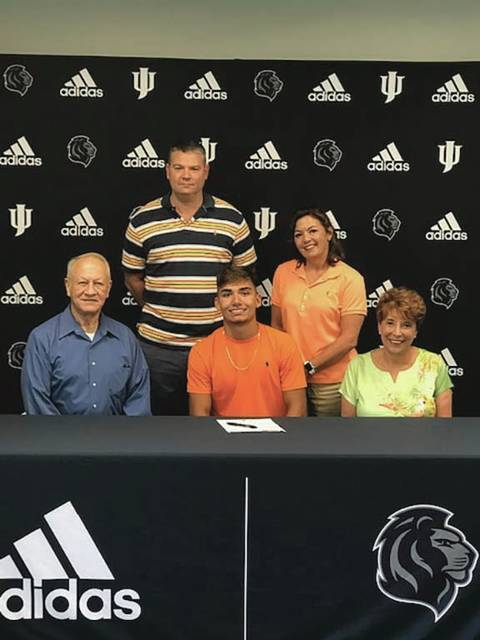 Harlan pitcher/shortstop Will Varner will continue his baseball career at Johnson University in Tennessee. Varner is pictured with Jim Orlando and Wanda Orlando (bottom) and Jason Coldiron and Shalena Miniard.

In his three seasons with the Harlan baseball program, Will Varner did a little bit of everything and did it all well as the Green Dragons’ best pitcher, best hitter, best fielder and best runner, just to name a few.

Varner will move to the next level to continue his baseball career, signing last week to play at Johnson University (formerly Johnson Bible College), in Knoxville, Tenn.

“Will is the type of guy the younger kids wanted to follow. He’s a great example of what a baseball guy should look like,” Harlan coach Cory Estep said. “He’s meant so much to our program. He’s a trend-setter and will be missed tremendously. Johnson University got better by signing Will. I’m happy for Will and thankful for the opportunity to coach him. He’s a great kid and athlete.”

“I decided on Johnson because of the great coaching staff and people they have there,” Varner said. “I knew it was the place for me after the visit. They also have a great program that for me was the best fit. I’m planning to play a two-way role as a middle infielder and pitcher.”

“We are excited that Will is joining our program this fall. He’s a tremendous athlete who we see legitimately being a two-way player for us,” Johnson coach Ben Fair said. “We really liked what we saw in him from the start, but honestly didn’t think we’d have the chance to get him here. We know he had some offers on the table, but we are really glad he chose us. Off the field, he’s a great guy, comes from a supportive family and that’s what really sealed the deal for us. We feel he’s going to be a good fit for our program and contribute right away.”

Varner moved to Harlan with his family as a sophomore and immediately found a spot in the lineup at shortstop and pitcher. He was a career .465 hitter with 87 hits in three years, including 22 doubles, five triple and one homer. He scored 79 runs, drove in 54, stole 78 bases (out of 80 attempts) and struck out only 12 times in three years. He had a 2.86 earned run average in 143 1/3 innings, with 267 strikeouts and 96 walks.

“Harlan has been amazing for me. The support I had from the very beginning meant a lot,” Varner said. “I can’t thank the coaches and players enough for my experience there. I can definitely say I played with the best bunch of guys I could have asked for.”

“Anything we needed done, he could get it done for us,” Estep said. “I see him as a 1-2, 8-9 guy in the lineup at Johnson. He will be very good defensively. They want to use him as a pitcher and infielder, which is kind of rare. I think that will suit him. I think he will compete right way. He has the heart of a champion.”

Johnson is a member of the National Christian College Athletic Association and competes in the Mideast Region. The Royals finished 11-31 last season, defeating Alice Lloyd College in tournament action before falling to Bluefield College and Oakland City University.

Daniel expects Cats to be as good as last year

HOOVER, Ala. (KT) — Kash Daniel waited for his opportunity on the field and it was his chance to shine... read more