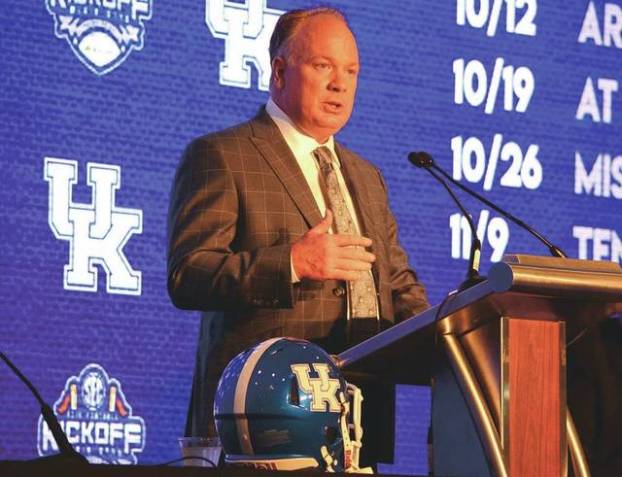 HOOVER, Ala. (KT) — Mark Stoops isn’t concerned where his Wildcats will be ranked when the preseason rankings are released this week.

During his seven seasons at Southeastern Conference Media Days, the Kentucky coach is used to the yearly predictions and won’t be be surprised where his team will land when the SEC preseason predictions by the league’s media are released Friday.

“We’ve performed a little bit better than what people thought the last three seasons and, hopefully, we can continue to do that,” Stoops said. “Was I worried about the (preseason rankings) the last three years? It’s no different now.”

Stoops jokingly admitted the disrespect makes his “blood boil” but added the Wildcats can’t rely on preseason rankings or pay attention to the early predictions.

The Wildcats finished 10-3 last season and lost several key players, including Josh Allen and Benny Snell, but Stoops believes his squad has the pieces necessary to keel climbing the proverbial ladder. Stoops said the main concern is finding a way to emulate Snell’s energy level.

“Benny Snell is big shoes to fill and we know that,” Stoops said. “The part that was undervalued with Benny was his attitude and his heart and his competitive nature. We have to make sure somebody fills that void. Talent-wise, we have very good players there and they (each) bring a different dynamic. We return some talented guys there and we’re excited about that.”

Stoops also knows there will be a few bumps in the road as his team builds around a new core of leadership that will be anchored by starting quarterback Terry Wilson.

“I’m excited about what we have coming back,” Stoops said. “We have a quarterback that won 10 games and was a first-year starter in the SEC and we have quality running backs that will have to fill some big shoes in Benny Snell and our receivers are getting better.”

As for the defense, Stoops is equally excited despite losing Allen and a big portion of the team’s secondary.

“Defensively, you always want to start up the middle and we’re as solid as we’ve been since I’ve been here up the middle with the three interior guys and the depth we have there,” he said. “At inside linebacker, we’re as deep and talented as we have been here and we have some safeties and nickle backs with experience. On defense, we are solid.”

As with the talent he’s assembled, Stoops said the Wildcats have taken a leap mentally during his tenure as coach.

“We want (the players) to constantly be in tune with their football IQ — know the situation in games and understand that,” Stoops said. “It is part of the reason why we put ourselves in position to win 10 games (last year). We want to continue to build on that.”

Stoops also said his team’s players progress during the summer “was turned up another notch.”

“You’ve heard me talk in the past about our capacity to handle more and that’s what we try to do,” Stoops said. “We constantly try to increase and put more volume (on the players). The more mature they get, the more developed our program is, the more you can do things like that.”

Now that the season is drawing closer, Stoops is anxious to see what transpires over the next four months.