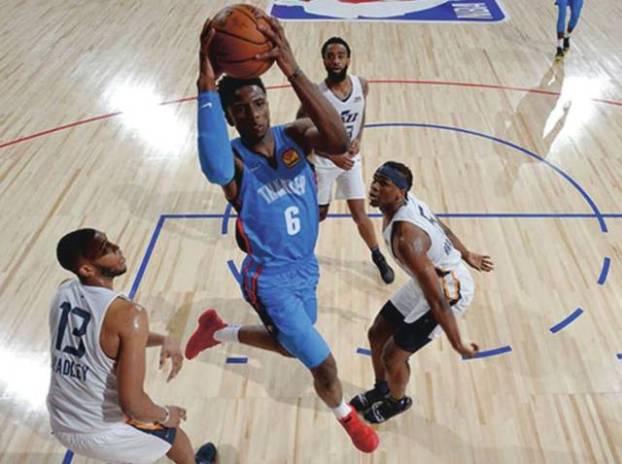 Hamidou Diallo, of the Oklahoma City Thunder, is enjoying a successful start in the NBA Las Vegas Summer League that began last Friday.

“It’s an unforgiving league,” Calipari said. “Fate intervenes and you get injured and the guy that stepped in for you starts playing out of his mind. Well, now you’ve got to wait your turn. That’s why I said you can’t make the club in the tub. Don’t get injured. But, you get injured, it happens. I think he is going to be fine.”

Diallo is simply glad to be back on the court.

“I’m just getting better each and every day, just trying to showcase the things that I’ve been working on since the offseason and since I’ve been back,” Diallo said on the team’s website. “I’m just trying to go out there and be the player that I know I am, try to get my teammates involved and try to be a leader as much as possible.”

Diallo is one of 13 former Kentucky players competing in the Las Vegas Summer League. Tyler Herro is averaging 19.5 points per game through the first two games for the Miami Heat. Wenyen Gabriel (Sacramento) scored 15 points in his debut, while New York’s Kevin Knox (14.5 ppg), Chicago’s Mychal Mulder (11 ppg) also are averaging double figures through the first two games of the league.

The Los Angeles Lakers will have a dose of Kentucky flavor on its roster next season. The Lakers acquired Anthony Davis from the New Orleans Pelicans and signed former Wildcat players DeMarcus Cousins and Rajon Rondo over the weekend. The three former Wildcats will join LeBron James and first-year coach Los Angeles coach Frank Vogel.

“Anthony Davis is arguably the most dominant all-around young player in today’s NBA,” Los Angeles Lakers General Manager Rob Pelinka said. “Anthony represents everything we stand for, with his unwavering commitment to excellence as both a person and athlete. This is a historic moment for the Lakers franchise, and we couldn’t be more proud to have him.”

Vogel also has ties to Kentucky. Vogel served as a student manager at Kentucky under Rick Pitino from 1994-95 and played on the team’s junior varsity squad the following season. Vogel graduated from Kentucky in 1996.

Vogel said the goal this season is to become unified.

“We are all going to be pulling in the same direction,” Vogel said. “This is something that I’ve always preached as a head coach, because you can accomplish amazing things if everybody is together. When that happens, with the way we do things from day to day, that stuff translates to the court and how we play.”

Washington also signed with Roc Nation Sports and said his finances are in good hands.

“I picked a great agency, and I have a good financial advisor,” Washington said. “(I’m) pretty much just listening to them. I think they’ll lead me in the right path. … I feel like I’m with a great group. I’m excited to be with them and just happy they took me along with the group as well.”