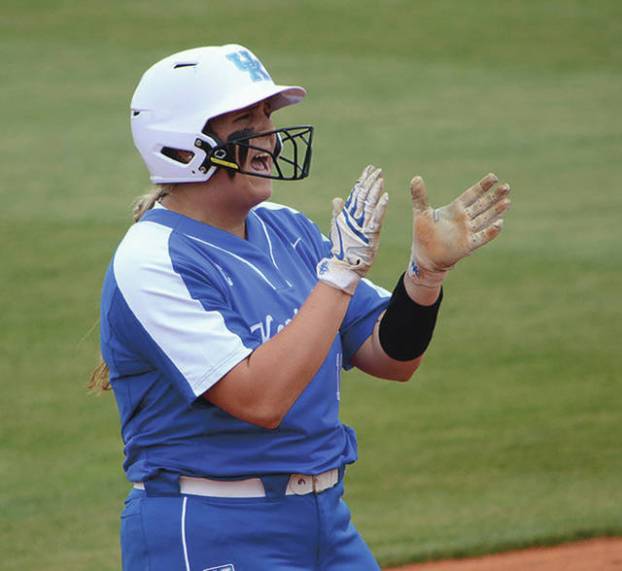 Abbey Cheek celebrated after slapping a double during the Wildcats’ win over Virginia Tech on Sunday. Kentucky takes on Washington in the Super Regionals beginning Friday in Washington.

LEXINGTON (KT) —Kentucky coach Rachel Lawson knows what her team will be going up against when the Wildcats take on No. 3 Washington in the NCAA Super Regionals Friday.

“Washington is always one of the best defensive teams in the country,” Lawson said. “I don’t know what their statistics are in terms of defense, but they’re very fast and they’re always really good. They do a great job covering a lot of the field. The balls don’t really fall in on their defense.”

The Huskies (48-7) disposed of Mississippi State in the regional round, ousting the Bulldogs in impressive fashion. Pitcher Gabbie Plan tossed a no-hitter and struck out 10 batters in the finale that sent Washington into the Super Regionals. Lawson said the Huskies’ defense, combined with solid pitching, provide the anchor for her team’s next opponent.

“They have two outstanding pitchers that give you two completely different looks,” she said. “One is a real power pitcher and she throws hard. The other one does a great job. She has tremendous spin, speed and throws a good drop ball and can also bring it up. They’re a great pitching and defensive team.”

Kentucky (36-22) was equally impressive in the opening round of the NCAA Tournament and swept all three games, including a pair of wins over Virginia Tech to reach the Super Regionals for the seventh time in school history. Lawson said her team’s turnaround began following a 4-1 loss to Western Kentucky on March 26 in Lexington.

The Wildcats got solid performances from Autumn Humes and Grace Baalman last weekend. Humes picked up a pair of wins, including the clincher over the Hokies last Sunday, and Baalman threw a solid game in the first of two wins over Virginia Tech.

Although pitching will be a key in the best-of-three series against the Huskies, Lawson said hitting also will be a factor.

Lawson added her team will know what to expect and won’t be fazed by the atmosphere at the Husky Softball Stadium when her team opens play against Washington at 9 p.m. Friday.

“Every team is a little bit different but we’re used to going to Super Regionals in terms of it’s not the first time,” she said. “It’s something the program (expects) and our goal every year is to get into the World Series. For this class in particular, they seem to be a little more relaxed. Everybody knows that all of us are on the same page.”

And it all starts at the top with her senior class, led by Katie Reed, Abbey Cheek and Jenny Schaper. Lawson said it would be a big deal if the Wildcats can reach the College World Series for the first time in school history.

“It would be definitely be icing on the cake if they could get to the (College) World Series,” she said. “That’s what they’ve been working (on) for four years. To be able to do that would mean everything to them.”