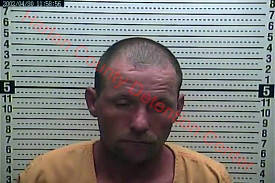 A Harlan County man is behind bars after police say he was selling drugs out of an abandoned house. Ryan Harris, 42, was arrested by Harlan City Police on Monday and charged with first- and third-degree trafficking a controlled substance and possession of drug paraphernalia.

According to the police citation, the department received a complaint that subjects were in an abandoned house on Shine Street possibly doing drugs. When police arrived, it was discovered that the electricity was illegally hooked up on the residence and no suspect had the right to be in the building.

The citation states police found multiple pills believed to be Xanax, clonazepam, gabapentin, needles and a crystal type substance believed to be meth. Harris was at the residence with a woman, but he claimed all the items belonged to him. Police also found $145.

Harris is being held at the Harlan County Detention Center on a $2,500 full cash bond.

Others recently arrested on felony charges include:

• Reggie Cottrell, 34, of Verda, was arrested by deputies with the Harlan County Sheriff’s Office on May 20. He was charged with cultivate in marijuana (five plants or more), theft by unlawful taking ($500 or more but under $10,000), third-degree criminal trespassing, flagrant non-support, receiving stolen property under $500, theft by deception (under $500), and contempt of court;

• Nathanial Ray Wilson, 29, of Benham, was arrested by officers with the Benham Police Department on May 21. He was charged with third-degree assault (EMS, Fire, Rescue Squad), resisting arrest, second-degree disorderly conduct, and alcohol intoxication in a public place.

A multi-employer job fair is coming to the Harlan Center on Thursday. If you are out of work or underemployed,... read more