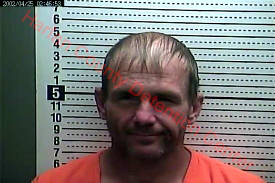 Man charged with complicity to assault, fleeing from police

According to the original complaint, Lt. J. Bunch of the Kentucky State Police, Post 10 initiated a traffic stop on a stolen 2003 white Ford Taurus occupied by three subjects — a female drive and two male passengers — on U.S. 421 in the Cawood community.

The complaint states Bunch observed the subjects not wearing their seat belts and knew the vehicle was stolen at the time of the stop. During the traffic stop, the female driver stated she did not have a license while Allen handed the trooper his ID. While the trooper was attempting to get identifying information for the driver and second male passenger, one of the males began yelling “go,go,go.”

According to the complaint, Bunch instructed the female to stop and get out of the vehicle, but she accelerated and struck Bunch with the vehicle while driving off at a high rate of speed. The stolen vehicle was later located abandoned in a cemetery. The female driver was arrested shortly after.

Allen is a family member of the victim in the stolen vehicle case the complaint states.

The following individuals were also recently arrested on felony charges:

• Jane Hatmaker, 52, of Coldiron, was arrested by deputies with the Harlan County Sheriff’s Office on May 11. She was charged with first- and second-degree possession of a controlled substance and possession of drug paraphernalia;

• Lonnie Lucas, 62, of Whitesburg, was arrested by troopers with the Kentucky State Police on May 13. She was charged with first-degree possession off a controlled substance, operating a motor vehicle under the influence and for being a persistent felony offender;

• Howard Wilson, 53, of Kettle Island, was arrested by officers with the Kentucky Fish & Wildlife Department on May 15. He was charged with first-degree trafficking a controlled substance (less than 2 grams of methamphetamine), second-degree possession of a controlled substance, possession of drug paraphernalia, possession of an open alcoholic beverage container in a motor vehicle, reckless driving, no registration plates, operating a motor vehicle under the influence.