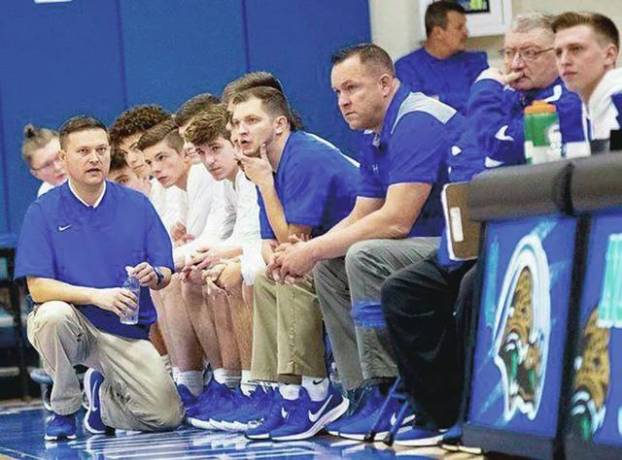 Brad Sizemore compiled a 160-95 record during his eight years at North Laurel. He is leaving the program to take over as coach at Bell County High School.

Sizemore leaves North to take over as Bell coach

Sizemore will be introduced as the Bobcats’ new coach at 1 p.m. Friday.

“The past eight years have been some of the best years of my life. I have took great pride in leading the North Laurel boys basketball program,” Sizemore said. “I have enjoyed every minute getting to work with great players, assistant coaches, great administrators, and a great fan base which made this experience so special for me.

“My decision to leave the program has been one of the hardest decisions of my life, but with that said, I feel that this is the best decision for me and my family at this time. This was an opportunity for my wife and I to get closer to family, and a great work opportunity for the both of us that we just couldn’t pass up on.”

Sizemore spent the past eight years as North’s head coach, leading the program to heights it had never seen before.

He set the tone during his first year at the helm during the 2011-12 season, guiding North Laurel to its first and only 13th Region Tournament championship with a win over 49th District rival Clay County.

After leading his team to a 60-64 mark during his first four years on the job, Sizemore had gone 100-29 since.

During the past four years, he has guided North Laurel to four consecutive 20-win seasons, consecutive 49th District Tournament championships for the first time in school history, while making an appearance in this past season’s 13th Region Tournament finals.

Sizemore compiled a 160-95 record during his eight years at North Laurel. His 160 wins rank No. 1 in program history.

He has also won two district titles and the program’s lone region championship. His North Laurel teams were 39-22 against 49th District opponents, which included seven wins over district rival Clay County. He also beat crosstown rival South Laurel seven times during 19 meetings between the two schools, which included this past March’s semifinal win over the Cardinals.

The cupboard is far from bare at North Laurel. Sizemore will be leaving the Jaguar program in excellent shape. Many consider North Laurel to be one of the top teams in the 13th Region next season with players such as Reed Sheppard, Isaiah Alexander and Cole Kelley returning.

“I’m very proud of the accomplishments and the continued improvements, and success that we were able to obtain over the last eight seasons,” Sizemore said. “I feel like the kids have got over the hump in many different areas. They want to win, they feel they can, and that they deserve it. “The new coach is going to inherit a great group of kids who are proven winners and know what it takes to play at a high level,” he added. “That is something I’m really proud of, as I leave the program. They are going to inherit great, young talent in several classes, so North should be very competitive for seasons to come.”

“As far as the future, I’m really excited to take on this new challenge. My responsibility to lead this program is not something I take lightly,” Sizemore said. “Along with the help of others, I’m going to work around the clock to put Bell County basketball on the map. When this opportunity presented itself, the first thing that came out of my mouth was Bell County basketball is a sleeping giant in this region. I feel like year in and year out you have great athletes to work with and people from the school and the community that really care about sports.

“It’s going to be my job to get the excitement going, and we are going to go to work day in and day out and it’s going to be about the kids. We want to give the kids the best experience possible and put a first class product on the floor. It’s my job to establish a consistent work ethic in the program and a sense of pride when you put on that Bobcats jersey. We want the players to feel they deserve to win at the highest level and that they can.”

Even though he’s moving on to a new school, Sizemore said Laurel County and the friendships he has made will always be cherished.

“Laurel County and London has helped mold me into the person and the coach I am today. I have coached a total of 16 seasons here between the two schools,” he said. “I have been able to make great friendships here through the game of basketball. I was fortunate enough to play in the Sweet 16 as a player at South Laurel, then to coach there for eight seasons during a great run of regional championships and a state title in 2005, which to this day, I’m very thankful coach Steve Wright gave me my start in coaching. I also had the opportunity to come back to be the head coach of North Laurel, and win the school’s first regional championship in 2012. I will always cherish the time I was able to play and coach here. There are great people here in this town that care about others and they have a love for basketball that is second to none. So, I owe so much to this county, and both the schools for all the opportunities that they have gave me over the years.”