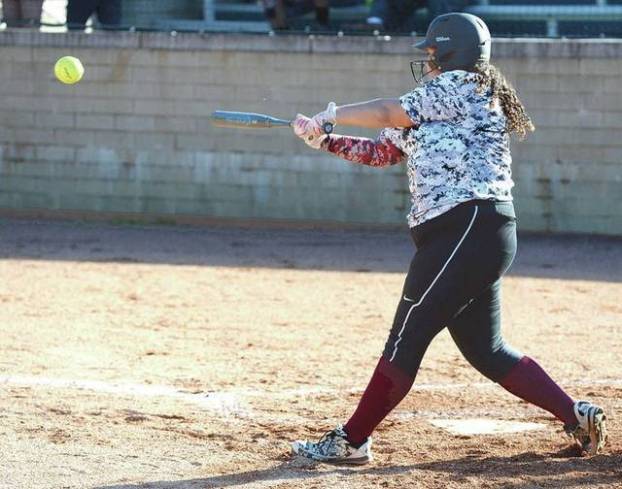 Harlan County third baseman Hannah Johnson connected on a pitch in action earlier this season. Johnson led the Lady Bears to a doubleheader sweep Monday at Leslie County with five hits in five at bats, including a grand slam.

Already a three-year starter coming into the season, junior third baseman Hannah Johnson was counted on to help carry the Harlan County offense during what was expected to be a rebuilding campaign.

Johnson has done just that from the season’s opening day until now, including a big night Monday as the Lady Bears swept Leslie County 16-3 and 17-5. Johnson hit a grand slam and singled twice in the opening game and had two singles in two at-bats in the nightcap to improve her average to .691 for the season. She hasn’t struck out in 72 at-bats.

“Hannah is super patient and she is waiting for her pitch. She is gapping the ball with power to all fields,” Harlan County coach Tim McElyea said. “We lost so much last year that I was worried about protecting her, but we’re doing pretty good protecting her. We’ve had some good hitters go through here, but she is one of the best we’ve had, and she’s not done.”

Johnson hit her grand slam during an eight-run first inning that blew the first game open. She also added two singles and finished with five RBI. Kerrigan Creech had a double and two singles for three RBI. Allee Galloway drove in two runs with two doubles. Brandy Adams drove in three runs with a double. Nikki Creech added a double. Emily Evans and Destiny Clark added one single and one RBI each.

Kerrigan Creech earned the win as she gave up one unearned run on one hit in three innings, with three strikeouts and no walks. Clark allowed two runs on three hits in two innings to close the game.

Creech pitched a complete game in the nightcap, striking out six and walking one.

Evans led the HCHS offense with three hits. Emily Collett drove in three runs with two hits. Johnson, Adams and Clark had two hits each. Jacey Lewis had a single and two sacrifice flies. Kerrigan Creech and Rhileigh Alred added one single each.

Harlan County edged Knott Central 8-7 and fell 7-2 to Perry Central on Saturday in the Tim Short Classic at Perry Central.

Clark drove Nikki Creech home with the go-ahead run in the bottom of the sixth inning. Creech saved at least one run in the top half of the inning with what McElyea described as “an unbelievable over-the-head catch in deep center” that she turned into a double play with a throw to second.

Johnson drove in three runs with a double and two singles in three at-bats. Kerrigan Creech and Nikki Creech each had two hits. Clark had a double. Collett and Evans added one single each.

Creech allowed six runs (one earned) in four innings on the mound, giving up three hits while striking out two and walking three. Clark earned the win as she allowed one unearned run in three innings with four strikeouts and no walks.

Johnson led HCHS against Perry with a double and single. Nikki Creech singled twice. Kerrigan Creech had a single.

Kerrigan Creech gave up seven runs (four earned) on eight hits, with one strikeout and one walk.

Harlan County (15-5) will play host to Letcher Central on Wednesday.

Kyle Johnson pitched a one-hitter in the opening game and Hazard collected seven hits in the nightcap as the visiting... read more