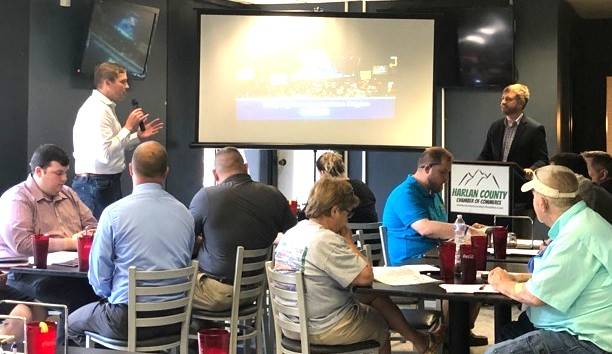 Jared Arnett, Executive Director of SOAR, spoke as part of the Harlan County Chamber of Commerce spring speaker series on Wednesday about the new initiatives and opportunities SOAR has to offer.

The spring speaker series of the Harlan County Chamber of Commerce continued Wednesday with Jared Arnett, executive director of SOAR (Shaping Our Appalachian Region), speaking about new initiatives and opportunities SOAR brings to the region.

According to Arnett, SOAR’s unofficial vision is “to leverage technology and the digital economy for economic growth better than any rural region in America.”

“I think that is a real possibility and we are on track to see that and to be that,” Arnett said in the meeting at The Portal.

Arnett reflected on an email he received from a colleague, who was being promoted and preparing to move. Arnett explained a specific line in her email stuck out to him: “In order to accomplish outcomes that you never even realized, you have to do things that have never been done.”

“That’s kind of a reality check,” Arnett said, later explaining it is exactly what he wants SOAR to be.

Arnett explained SOAR is all about creating a future in Appalachia, together, through regional blueprints for the future of Appalachia and organizational strategy to activate the blueprints. “To make sure that ‘plan,’ doesn’t just sit on a shelf,” Arnett said.

Arnett explained under each goal there are multiple objectives to challenge people and help them accomplish those goals. Through the organizational strategy, Arnett described three main parts.

The second part is to “drive aligned action.” In this step, Arnett said SOAR tries to increase the amount of innovation activity aligned with the blueprint, increase awareness of the aligned activity and improve cross-sector collaboration. He added it is important to drive communication.

The last part of the strategy is to “be the champion,” where individuals and organizations should strive to promote and inspire others throughout the region to keep things moving.

“The key to this work is community,” Arnett said.

Arnett added through the use of convenings, such as the SOAR Summit, communication and consulting, the region can continue to diversify and grow.

• Harlan County Judge-Executive Dan Mosley announced a job fair will be held May 23 at the Harlan Center from 10 a.m. until 3 p.m. Additional employers wishing to set up a table for the job fair may call the Harlan Center at 606-573-4495. Mosley also announced the 2019 Poke Sallet Festival is scheduled for June 6-8, inviting everyone countywide to attend;

• The next scheduled chamber meeting will be June 12 at The Portal. The spring speaker series continues with Sandi Curd, director of the Promise Zone;

• The chamber announced the Mega Mountain Mural Festival will be from June 20-25;

• The chamber announced it will begin recruiting guest speakers for the summer speaker series;

• Arnett announced Rediscovering the Doctrine of Work: A Faith Based Convening will be held May 14 in Hazard from 9 a.m. until 3 p.m. Arnett also announced the Broadband and Barbecue event will take place June 6 at Hazard Community & Technical College from 10 a.m. until 3 p.m.;

• Jennifer Parsons, from the Harlan Independent School District, announced a new set of statutes passed down from the state to be implemented in the next calendar school year. The statutes outline skills essential for the workplace, such as critical thinking and remaining drug-free. After completion of the program, students will receive some form of recognition, whether it is a cord to wear at graduation or a seal on their diplomas. Parsons explained many of the statutes have already been implemented into the school, like the remaining drug-free philosophy, but the program will better recognize these traits students will carry with them into the workplace.