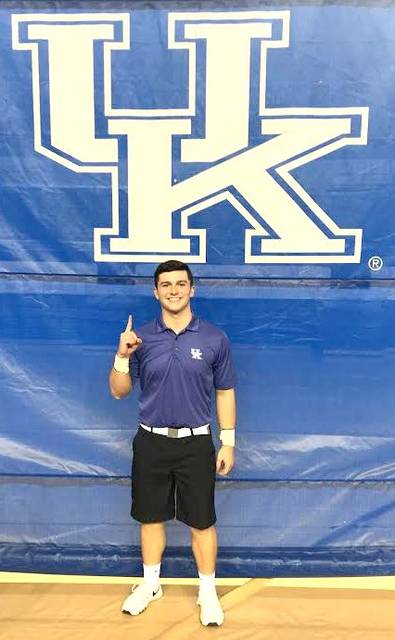 Harlan High School student Brady Adkins was announced on Sunday as a member of the University of Kentucky’s 2019-2020 cheerleading team, a 24-time national title holder.

A Harlan High School student was accepted into the University of Kentucky’s 2019-2020 cheer squad on Sunday. Brady Adkins, a senior at HHS, made the cut after multiple tryouts and an interview, leaving both him and his supporters awestruck.

Adkins said each cheerleader must receive an invitation to try out for a spot on the University of Kentucky cheer squad. Tryouts are a three-day long process, beginning on Friday with the final team announced on Sunday. Coaches make cuts at the end of each day before the final decision is made.

“I am beyond excited for this opportunity. This has been a dream of mine for years now, and to finally see it become a reality is a blessing,” Adkins said.

Superintendent C.D. Morton added his comments on Adkins’ acceptance, saying he is “a shining example of what is possible when you dedicate yourself to being the very best.”

“We are extremely excited for Brady and for the UK cheer team,” Morton said. “Brady has worked extremely hard to be the very best at what he does. His dedication put him in a position to be a part of the very best program in the country.”

Morton added Adkins is a star inside the classroom as well, not just on the field.

“While he gets to join a 24-time national championship squad, they get a remarkable student-athlete,” Morton said. “He is a dedicated student graduating as salutatorian of his class, a devoted athlete selected to join the nation’s top cheer program, but most importantly he is one of the kindest students to walk the halls of Harlan High School. He truly epitomizes what we hope to inspire in all of our Green Dragon students.

“Brady was given the opportunity to showcase his talents and was supported by his school and family to achieve this remarkable honor. We are excited to watch him develop over the next four years while he travels around the world, competing at the highest level.”

Adkins will join the University of Kentucky cheer squad for the 2019-2020 season as he attends school. The squad is a 24-time national title holder with two teams: the Blue Squad and the White Squad. Both squads contain eight to 10 females and eight to 10 males. Members from both squads are eligible and are considered when selecting a squad for competition, as stated on their website.

Rabies vaccination to begin May 15

An oral rabies vaccine (ORV) bait will be distributed throughout parts of eastern Kentucky and southwestern Virginia beginning May 15,... read more