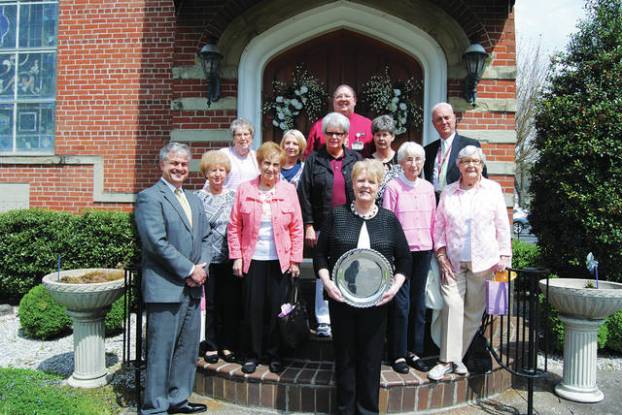 Whether it is helping patients and visitors with directions, visiting with patients and/or family members, working in hospital gift shops, organizing magazine drives or assisting with hospital events, volunteers are an important part of the ARH healthcare team.

ARH honored the more than 225 men and women who give of their time and talents as volunteers for the ARH system of hospitals in eastern Kentucky and southern West Virginia during a special ceremony in their honor in April at Barbourville First United Methodist Church. Approximately 100 volunteers and staff members attended the event, representing 12 ARH communities. During the event, attendees enjoyed guest speakers, entertainment, a meal and awards were presented.

During the Volunteer Appreciation Event, the Harlan ARH Hospital Auxiliary was presented with the Outstanding ARH Auxiliary Program of the Year Award for their youth volunteer collaboration project.

With 20 members, the Harlan ARH Auxiliary averages about 147 Hours of service per month, and their volunteers have donated around $6,400 to the hospital within the last year. Last year the volunteers expressed concern about the lack of service opportunities for motivated young people in the community and wanted to offer the chance to help those willing to serve. They reached out to the high school students enrolled in the certified nurse aide training program, located on the Harlan campus of Southeast KCTCS, which happens to be across the street from the hospital.

About 12 students from that program, who are also members of the Health Occupations Students of America (HOSA), were offered the opportunity to serve as teen volunteers in the hospital. These students were able to earn community service hours for their organization and also enhance customer service to ARH’s patients by using their initial level of CNA training to supplement the hospital nursing staff in both the acute medical-surgical unit and the Emergency Department in appropriate and supervised ways.

This began in the fall of 2018 and the students’ first hospital shifts were scheduled to coincide with their Christmas holiday. One of the students worked over 200 service hours at the hospital between December 20 and February 28. The auxiliary members followed this up by donating sufficient funds to the Harlan County HOSA chapter to allow participating members to attend their organization’s state convention in Louisville.

This project showed the auxiliary members the value of expanding their vision in ways that can build upon the ARH mission to be a partner in service to the people in the community.

Also honored during the volunteer appreciation event, were three volunteers who received the ARH President’s Award for Volunteer Service. ARH started awarding the President’s Award for Volunteer Service 10 years ago in an effort to recognize specific individuals that have contributed greatly to our hospitals and our communities through their volunteer service.

On April 27, approximately 100 walkers and supporters took to the streets, specifically Main Street in downtown Harlan, for the... read more