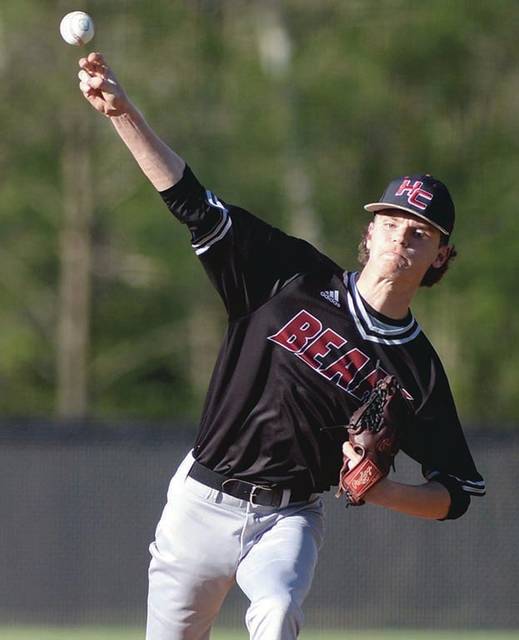 Harlan County eighth-grader Brayden Blakley earned his second win of the season on Saturday as the Black Bears rallied for an 8-7 win at Letcher Central. Blakley pitched 2 2/3 shutout innings with four strikeouts and one walk.

Bears rally for victory over Letcher

Brayden Blakley and J Harris combined for four shutout innings as Harlan County rallied from a 5-2 deficit to win 8-7 on Saturday at Letcher Central.

Eighth-grader Brayden Blakley earned the win as he gave up two hits in 2 2/3 innings while striking out four and walking one. Harris earned the save as he allowed one hit with one strikeout and one walk while recording the final four outs.

Harris also led the HCHS offense with a double and single. Jordan Steele added a double. Garry Henson, Tyler Casolari and Michael Simpson added one single each. Casolari drove in two runs while C.J. Carruba, Steele and Simpson added one RBI each. Justin Brown stoled three bases, while Henson had two and Harris added one.

Steele started on the mound for the Bears, giving up five runs on two hits and two walks. Quinton Boggs allowed two runs on four hits with two strikeouts and two walks in 2 2/3 innings.

Justin Brown started two-run outbursts in both the first and third innings by being hit by a pitch. Casolari followed with an RBI single in the first, then Steele doubled home a run.

Brown was hit by a pitch in the third inning and moved up on Henson’s bunt single. Casolari and C.J. Carruba each drove in runs with ground outs to shortstop.

Harris doubled in the fourth inning, then stole second and scored on Michael Simpson’s ground out.

Blakley was hit by a pitch in a three-run sixth inning and Harris and Simpson followed with bunt singles. Zac Collett walked to force in a run. Brown’s grounder to short was misplayed, allowing the tying and go-ahead runs to come home.

Harlan County (7-12) will play host to Hazard on Monday.

Unable to get down a bunt in the sixth and seventh innings of a tie game, the Harlan County Black... read more