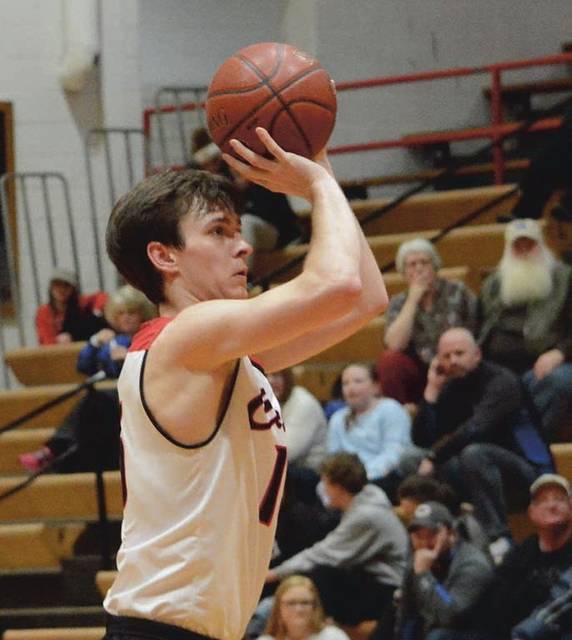 George Rogers Clark standout Brennan Canada will walk-on at Kentucky next season. Canada has been a captain for the Cardinals during the past two seasons.

Clark standout will walk on at Kentucky

LEXINGTON, Ky. (KT) — Brennan Canada will be wearing a blue uniform next season.

The George Rogers Clark senior forward will walk-on at the University of Kentucky next year, fulfilling a life-long dream of playing for the Wildcats. Canada helped lead the Cardinals to an 26-8 record and a runner-up finish in the 10th Region Tournament. Clark lost to Campbell County in the regional finals.

“I’m excited to be joining the team,” Canada said. “It’s always been a dream of mine to wear a Kentucky jersey. I look forward to getting to work and chasing my dreams as a part of the Big Blue Nation.”

Canada was an all-region performer last season and averaged 15 points and 9.5 rebounds per game. He averaged double figures during the last three seasons and scored 1.371 points and grabbed 776 rebounds. Canada can play multiple positions and opted to play for the Wildcats. He was a two-year captain for the Cardinals and was a three-time all-district selection.

“Brennan had opportunities to play other places but wanted to be here and be a part of this,” Kentucky coach John Calipari said. “Anytime we can add a player from our state who can come in and help our program, I’m always for it. Brennan knows what we expect of our walk-ons. We know he will be great teammate and a valuable addition to our team. We are excited to have him join this program.”

Jordan Graham, also a senior at Clark, is happy for his former teammate.

“Brennan is one of my best friends,” Graham said. “The bond we have both on and off the court is very special. I am very proud of him and no one is more deserving of this opportunity.”

Canada is the fifth player to join the Wildcats. Tyrese Maxey, Dontaie Allen, Keion Brooks and Nate Sestina will be among the team’s newcomers next season.

Anyone making a list of Evarts High School basketball greats would almost certainly begin with Billy Hicks, both for his... read more