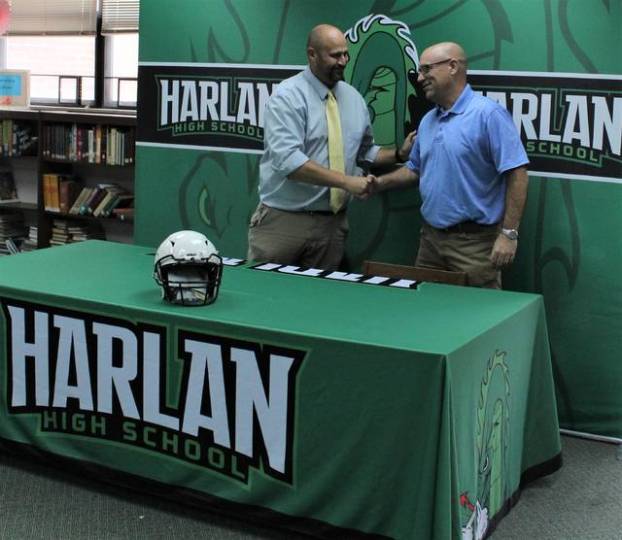 Eric Perry was welcomed Thursday afternoon by Harlan High School Principal Britt Lawson as the new football coach for the Green Dragons. Perry, a Frankfort native, is a former assistant coach at Harlan and was the head coach at James A. Cawood High School for the 2007 season. Perry met briefly with team members after the announcement in the school’s library.

A lengthy search for a new head football coach at Harlan High School ended Thursday afternoon as Eric Perry stepped out from behind a curtain at the HHS library to meet his players after an introduction from Principal Britt Lawson.

Perry has 17 years of coaching experience, including eight as an assistant for the Dragons.

“We didn’t want to rush anything and we wanted the absolute best,” Lawson said. “We put feelers out around the state and talked to people from Cynthiana to West Liberty and all over the region. When it came down to it, Eric Perry was the best applicant we had. His success drew us to him. We were very excited to interview him and get him hired. We’re excited about the direction of Dragon football.”

A 1986 Frankfort High School graduate, Perry spent several years as an assistant coach, beginning when he was still a student at Eastern Kentucky University. He coached with his brother, Jerry, at Garrard County, then followed with stops at Lincoln County and Danville. Perry served eight years as the defensive coordinator at Harlan, spread over two stints.

Perry spent one season as a head coach, taking over the James A. Cawood program in 2007, the year before Cawood, Cumberland and Evarts were merged to form Harlan County High School. The Trojans finished 4-7 that season, losing to Estill County in the first round of the 3A playoffs.

The Trojans did finish 2-1 that season against county competition, including a 12-7 victory at Harlan to open the season. Harlan will open the 2019 season at Harlan County High School in the first meeting between the two schools in football. Perry touched on the topic briefly in his discussion with the HHS players, noting “we have to get ready for that team down the road.”

Perry noted in his speech to this year’s players that the Dragons wouldn’t be using inexperience as an excuse even though 11 seniors are gone from last year’s 4-7 squad, including the Dragons’ top passer, top two rushers, top two receivers and seven of their top 10 tacklers.

“I know people talking about this team losing a lot of seniors. I don’t want us to rest on that and make excuses,” said Perry, who noted that the team would start working out the Tuesday after Memorial Day and continue to the state’s dead period, then start again immediately after the dead period ended.

He told the players in attendance he’d like to restore excitement to the program and compete on a state level.

“There’s nothing like playing in regional title games and state championships,” said Perry, who reflected on Harlan’s run as a basketball state contender in the 1990s with “Charles Thomas, Michael Jones, Todd Cox and Casey Lester.”

“I think you always have it in your blood,” said Perry of his decision to return to coaching after three years away. “This is.a special situation for me.”

“I know there is some good talent coming back,” Perry said. “When you lose 10 or 11 seniors from a roster with 25 or so, that is pretty significant, but I’d like to think I’m patient. I want to be competitive pretty quick. When that happens, I have no idea, but we’ll go at it full go and see what happens.”

Perry said he will stick with much the same defense he’s used in the past, with either a “50” or “43” alignment.

“We’ll be disciplined and make our reads and run. I want us to be good tacklers, of course,” Perry said. “Offensively, we’ll bring a style the fans are really going to like. We’ll be a zone-read offense but not afraid to take shots down the field. I think the fans will enjoy it, and I think the kids will, too.”

John Lewis had an answer ready when someone asked him Tuesday who would pitch for his Harlan County Black Bears... read more