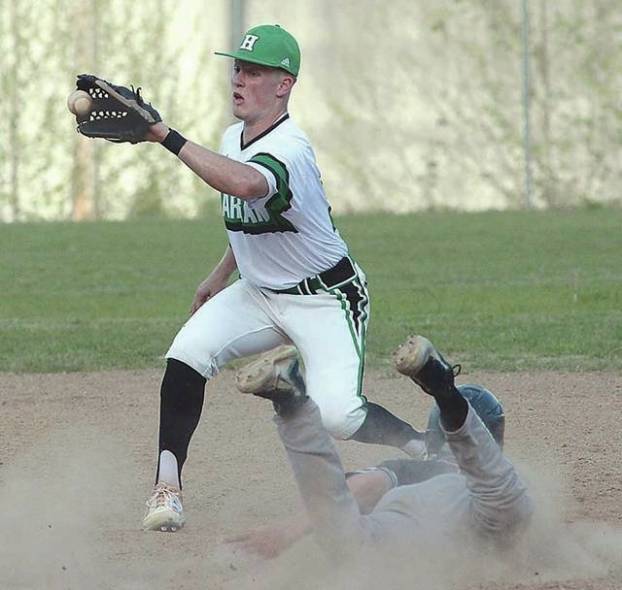 Harlan shortstop Kilian Ledford took the throw before tagging out Harlan County’s Justin Brown on a steal attempt Wednesday. Brown had two hits and reached base five times in the Black Bears’ 11-8 victory.

John Lewis had an answer ready when someone asked him Tuesday who would pitch for his Harlan County Black Bears on Wednesday against Harlan, moments after the Bears had finished off a 7-5 win over the Dragons.

The old baseball joke, which means anyone and everyone could pitch, was apropos considering Harlan County had used its two top pitchers in complete-game efforts Monday and Tuesday with ace Benjamin Lewis already out for the season after suffering an injury two weeks ago.

As it turned out, Wholestaff wasn’t spectacular, but he was good enough as the Bears gritted their way through an 11-8 win, beating Harlan ace Will Varner in the process. Jordan Steele pitched two-plus innings and allowed two runs on two hits with five strikeouts and five walks. Jon Wilder allowed five runs on six hits in 3 1/3 innings, with seven strikeouts and two walks. Quinton Boggs earned the save as he allowed one run on one hit with two strikeouts and one walk in 1 2/3 innings.

“Kudos to Johnny Wholestaff,” Lewis said. “We were trying to get the No. 2 seed and we just got it. I’m ticked for the boys because this is a hometown rivalry. We tried to stay a run or two ahead. I have to hand it to the boys. We pushed Jordan to the limit, then Wilder came in and gave us some innings. We didn’t know about Quinton, and we were going back to Jordan before I went to my eighth-grader (Tristan Cooper), even if it was just for a batter or two. We will rely on Cooper eventually.”

Harlan County built a 5-0 lead before Harlan battled back with a five-run third to take a lead. Harlan County tied it in the fourth and took the lead for good with three runs in the fifth inning.

“It comes down to one word. We’ve been battling adversity all year, and I like the fight I see,” Harlan coach Cory Estep said. “It’s something we’ve talked about and something we haven’t seen — the ability to come back will pay dividends later on.”

Varner gave up nine runs on five hits in 4 2/3 innings, striking out six and walking six as his pitch count escalated due to several costly errors, especially on HCHS bunts. Evan Browning allowed two runs on three hits with one strikeout and two walks in 2 1/3 innings.

“He fought adversity tonight and did the best with what he had, even though we didn’t always make plays behind him,” Estep said. “We’ve only got two games in the next 10 days or so. We have some time to clean things up.”

“We put the ball in play against him. He’s a great pitcher,” Lewis said. “He works his tail off on the mound. These boys really executed and got their bunts down.”

Tyler Casolari led the HCHS offense with two doubles. Antonio Roman and Justin Brown had two singles each as the 1-2 hitters in the order reached base in nine of 10 trips to the plate. J Harris and Steele added one single each.

Several close calls went against the Bears and Lewis was eventually restricted to the dugout after arguing when courtesy runner C.J. Carruba was called out on an appeal after appearing to score on a.sacrifice fly.

“I wasn’t happy with our umpiring,” Lewis said, “on the sacrifice fly and three plays at first. I know at least two of them were safe.”

Harlan County scored four runs in its first bat as Roman led off with a walk and Brown beat out a bunt single. Garry Henson was safe on the first of three straight Harlan errors on his sacrifice bunt. Wilder was also safe as Brown scored the second run on Varner’s errant throw to the plate. Casolari drove in a run with a ground out. Wilder scored the final run after another error.

Roman pushed the lead to 5-0 in the second inning as he walked and eventually scored on a passed ball.

Harlan scored a run in the bottom of the inning after Hawkins and Mills singled and Varner drove in a run with his fielder’s choice grounder.

Casolari doubled to start the top of the third. Carruba scored on Steele’s fly ball to left before he was called out an appeal.

Two straight walks to open the third inning marked the end for Steele. Hawkins and Adkins each drove in runs with singles and Lindsey doubled in two runs. Varner was safe on an error to put the Dragons up 6-5.

Zac Collett walked to open the top of the fourth and scored the tying run on Brown’s single to left.

Harris singled to start the fifth inning and scored on Roman’s two-out hit after an error kept the inning alive. Henson was hit by.a pitch and Wilder walked to force in two more runs and push the lead to 9-6.

Adkins singled in the bottom of the fifth and scored on Varner’s two-out double.

Simpson and Roman led off the seventh inning with bunt singles, then Brown was hit by a pitch to load the bases. Henson’s sacrifice fly brought in one run and another run scored when Brown was caught in a rundown.

Mills walked to open the bottom of the seventh and scored on Varner’s ground out. Wilder made a nice back-hand play to record the out. Boggs struck out the next two Dragons to end the game.

In a 14-4 win Tuesday at Middlesboro, the Lady Jackets were swinging for the fences as they racked up three... read more