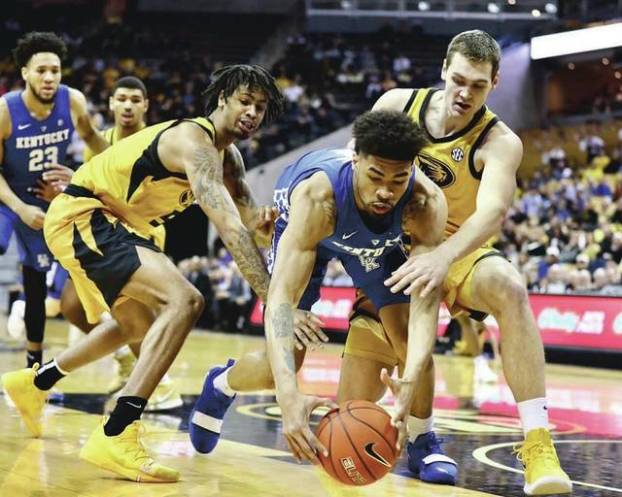 Kentucky sophomore forward Nick Richards, pictured in action last season, has declared for the NBA Draft but left his options open for a return to UK.

LEXINGTON (KT) — Nick Richards has decided to test the waters.

The Kentucky sophomore forward declared for the NBA Draft on Monday and will go through the pre-draft process. Richards simply wants to “explore every option and see where my game is” before making a final determination on his future. Richards will have until May 29 to make a choice whether to remain in the draft or return next season.

“I know that my game has grown so much in my time at Kentucky and I want to thank coach (John) Calipari, and my teammates for pushing me to be my best every day,” he said. “I want to keep all doors open. If this isn’t my time, I’ll be more than excited to suit up in front of the best fans in the country again next season and chase our goal of winning a national championship.”

Richards has played in 74 games during his first two seasons with the Wildcats and started 40 contests. He has averaged 4.5 points per game and 3.9 rebounds per game in his two seasons. This past season, he collected 47 blocks to lead the team and had five in a win over Kansas. Richards pulled down 19 rebounds — a career-high — in a win over Southern Illinois.

Richards said the experience will be “a learning process for me.” He said getting the opportunity to play at the next level and winning a national title are the two goals he committed to when he signed with the Wildcats. He added “that’s what makes Kentucky so special.”

“You have the chance to play on the biggest stage in college basketball and coach Cal and (Kenny Payne) and the staff prepare you for the next level. … I appreciate the Big Blue Nation for being both understanding and supportive of my decision,” he said. “I can’t thank you enough for welcoming me into your family from Day 1.”

Calipari said Richards is “one of the most lovable and nicest people I’ve ever coached” and supports his decision.

“He’s made great series and at some point, he’s going to be an NBA player who influences games,” he said. “At 7-foot with his ability to shoot and block shots, it’s just a rare commodity. I think Nick is making a good decision for him and his family to explore their options and see what’s out there. I’ll fully support what he and his family choose to do.”

Richards is the fifth underclassman to declare for the draft since the season ended. PJ Washington, Tyler Herro and Keldon Johnson have declared and will not return next year. Richards and teammate EJ Montgomery are exploring the same options and both could be back at Kentucky next season.

The NBA Draft Combine will be May 15-19 in Chicago. The NBA Draft is set for June 20 at the Barclays Center in Brooklyn, New York.

Boggs, Clark lead Dodgers past Braves The Benham Lodge Dodgers ran their record to 2-0 with an 11-8 win over... read more