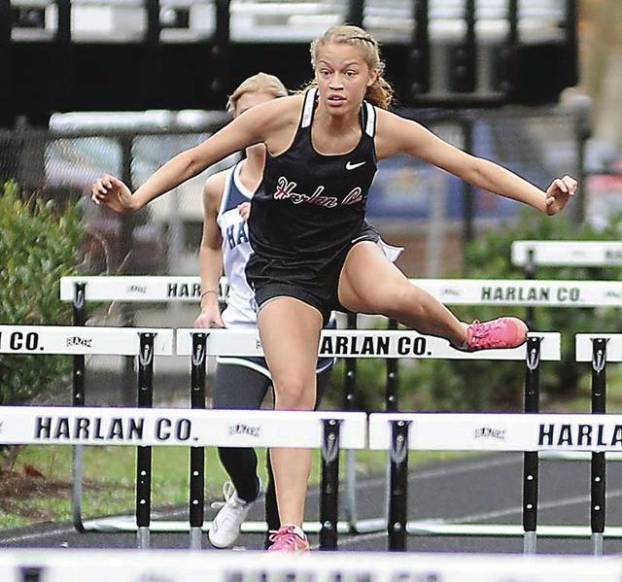 Abby Stephens cleared a hurdle in a meet earlier this season. Stephens was part of the winning 4 x 100 relay team last week at Pulaski County.

With their status as a legitimate regional track and field contender becoming clearer every meet, the Harlan County Black Bears probably left some opposing coaches reminiscing fondly Tuesday night about the program’s days as an also-ran.

The girls placed third and the boys finished fourth in an enormous 16-team meet Tuesday at Pulaski County that included many of the team’s Class 3A Region 7 rivals at the site of this year’s regional championship meet.

“This was a good experience against this level of competition, and being at the regional facility was a plus,” Harlan County coach Ryan Vitatoe said.

The girls squad finished 11 points behind Somerset and 42 behind Pulaski. Two Harlan County relay teams won their events, as Hannah Wood, Phebe McHargue, Makayla Walters and Abby Stephens posted a time of 54.92 seconds in the 4 x 100-meter relay and McHargue teamed with Kassydee Owens K.K. Johnson and Morgan Blakley to post a 4:33.71 in the 4 x 400-meter event.

Vitatoe praised the way his team rallied after a slow start.

“I felt like we came out flat in the first half of the meet. That’s an experience we will have to learn from as region approaches. I am proud of the turnaround midway through,” he said.

The Bears netted a pair of second-place finishes in the boys events as well, as the 4 x 800-meter relay team of Brock, Chasteen, Carmical and Cooper McHargue finished in 9:09.47 and sophomore Hunter Blevins threw 41 feet, 5 inches in the shot put.

“It says a lot about how far this program has come in the last few years, to come up here and win several events and to see so many (personal records),” Vitatoe said. “I love this team, and I’m excited to see where they go from here.”

Harlan County returns to action Tuesday in an all-comers meet at North Laurel.