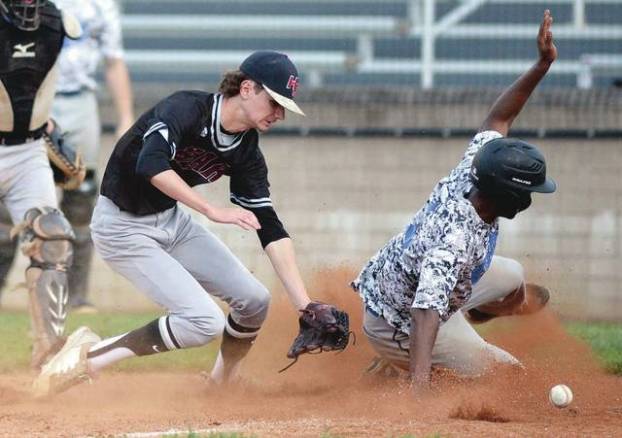 Bell County’s London Stephney beat the tag of Harlan County pitcher Brayden Blakley to score the go-ahead run in the sixth inning of Monday’s district clash at the HCHS field. Bell won 3-1 despite a two-hit performance from Blakley, who struck out seven and walked one.

In an 11-4 win Thursday at Bell County, the Harlan County Black Bears executed to perfection and put constant pressure on the Bobcats with a steady stream of bunts that they struggled to handle.

Bell went from five errors to none in the rematch on Monday and the Bears didn’t bunt as well and struggled to capitalize on scoring opportunities as the visiting Bobcats claimed a 3-1 win.

“Both teams played well today,” said Bell County coach Scott Chaney. “We didn’t hit it very well today, but we made the routine plays, which we didn’t do Thursday. We had some key hits. We’ll take a win when we can get it.”

Harlan County left 10 runners on base, coming up empty in the first inning with runners on second and third with no outs and again in the seventh with the bases loaded and no outs.

The Bears’ lack of clutch hitting spoiled a masterful performance on the mound by eighth-grader Brayden Blakley, who pitched a two-hitter with seven strikeouts and one walk.

“They tell me he’s an eighth-grader, and he pitched a great game today,” Chaney said. “Hayden Clark pitched real well for us, then we brought in our senior and he closed it out like we expect him to do.”

Clark gave up one run on three hits in 4 1/3 innings, with six strikeouts and two walks. D.J. Estes, the loser in Thursday’s game, earned the win as he pitched 2 2/3 shutout innings, giving up two hits while striking out three and walking three.

Hayden Clark broke up Blakley’s no-hitter with a one-out single in the fifth inning. London Stephney was safe on an errant throw to third base and Ethan Brock was hit by a pitch to load the bases. Two wild pitches brought in Clark and Stephney to put the Bobcats up 2-1.

Jacob Smith had the other hit for Bell with a double to open the seventh inning. He scored on Estes’ ground out.

Antonio Roman had two singles for the Bears. Garry Henson, Jon Wilder and Michael Simpson had one single each.

Justin Brown and Roman walked to open the game, but Clark retired the next three Bears to end the threat.

The Bears lost two runners on the bases in the third inning. Roman led off with a walk but was picked off first. Tyler Casolari followed with a walk and courtesy runner Nathan Shepherd was cut down at third as he tried to advance on Henson’s single to left.

Simpson and Brown walked to open the seventh and Roman beat out a bunt hit to load the bases. Estes got Casolari to pop out, then struck out Henson and retired Quinton Boggs on a grounder to third to end the game.

Sestina expected to over for Travis in UK frontcourt