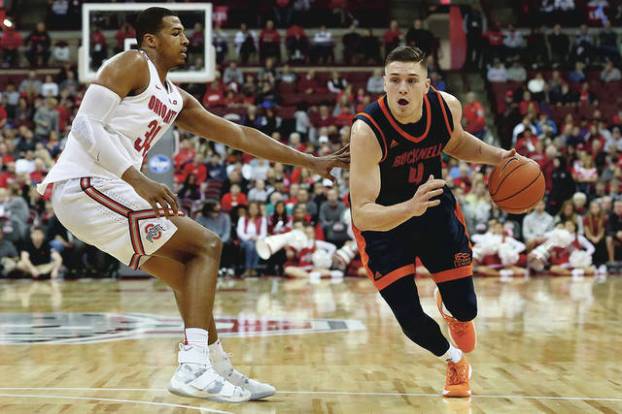 Nate Sestina will join the Kentucky basketball team as a graduate transfer next season. Sestina is expected to give the Wildcats experience in the post.

Sestina expected to over for Travis in UK frontcourt

The signing of Sestina marks the second straight year the Wildcats have added a graduate transfer to the roster. Reid Travis just concluded a successful one-year stint at Kentucky last month and was instrumental in helping lead the Wildcats to a 30-7 record and an Elite Eight appearance for the first time in two years.

“It’s been an amazing ride from Emporium (Pennsylvania) to Bucknell and everywhere in between, and it’s surreal to think my college basketball career isn’t over yet,” Sestina said. “I’m humbled to get started with Kentucky. I want to thank God, my family, my coaches, my teammates and John Calipari for this opportunity.”

Like Travis, Calipari said Sestina fits the criteria he said for graduate transfers and added he’s not “going to take someone if they’re not going to have an impact.”

“After seeing what Reid’s (Travis) move did for him this past season and how he helped our program, I told our staff if there are other kids in his situation that could benefit, let’s take a look at them. Nate falls into that scenario in that he’s achieved what he set out to do and now wants to take this thing to the next level.

“I’m excited to get to work with him because he’s where the game is going. He has the ability to play in the post but he can stretch you out, which gives us the ability to play a little different and open things up more. He’s a great kid from a great family who wanted this challenge.”

Like Sestina, Calipari said the arrival of Brooks will elevate the team’s roster next season.

“Keion is such a unique player because he has guard play-making ability in a 6-7, physical frame,” Calipari said. “In the last year at La Lumiere, he has physically improved leaps and bounds and is going to continue to get stronger. He helped his team to a 29-1 record, which shows you he’s a winner. We expect him to have a major impact on this program just like he did at La Lumiere. He’s a great kid from a great family and I can’t wait to get him here.”

Brooks said the decision to play at Kentucky “just came down to the relationship I built with coach Cal.”

“He’s always told me he can put me in a position to reach and achieve my dreams and my goals,” he said. “When I sat down and talked to him for the last time, I felt very comfortable making my decision of going to Kentucky.”

Middlesboro completed a two-game district sweep of Harlan with a 17-2 win Thursday at Middlesboro. “We came out flat tonight,”... read more