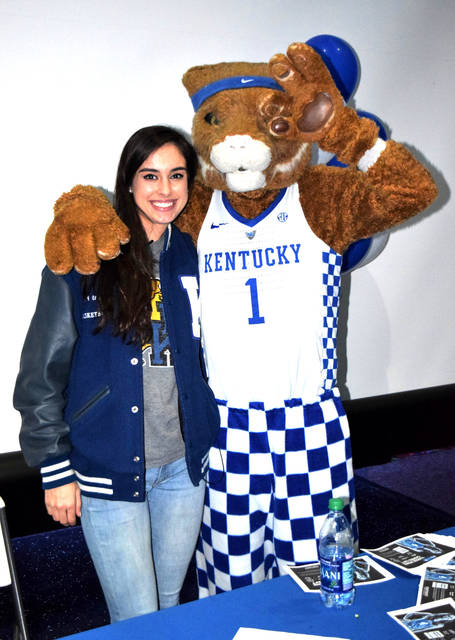 UK standout and former Bell County star Maci Morris stands next to the Kentucky mascot during her visit to Pineville earlier this year.

After failing to hear her name called last week in the WNBA draft, Maci Morris still has hopes for a future in professional basketball.

Koyer Management, Morris’ sports agency, announced on their twitter page Monday that Morris had signed a training camp contract with the Washington Mystics.

As a Bell County native, Morris made the most of her time at Bell County High School, playing varsity basketball since the seventh grade, starting since eighth grade. She was rated the 10th-best shooting guard and a top-50 prospect nationally by espnW. She was also named 2015 Miss Kentucky Basketball.

Morris finished her high school career with 3,368 career points, ranking sixth in Kentucky state history. Morris averaged 25.6 points and 7.9 rebounds her senior season to help lead Bell County to a 29-3 record, reaching the first round of the Sweet 16.

As a junior Morris averaged 22.1 points and 9.6 rebounds per game, shooting 55.6 percent in total field goal percentage and 35.1 percent from beyond the three-point line.

Morris’ college career was just as successful as her high school career. Being named to the SEC All-Freshman Team, Morris’ career at UK got off to a great start. In her freshman campaign, Morris started in all 33 games, averaging 8.5 points per game.

In that same season, she was second on the team with 49 3-pointers made. She had the fifth-best offensive performance in a varsity debut in UK history against Rice, totaling 16 points in the victory, including a three-of-five performance from downtown.

Being a versatile player on both ends of the court, Morris would fit in with the Mystics. After a 2018 season in which Washington amassed a record of 22-12 before falling to Seattle in the WNBA finals 0-3, they hope to repeat by making it back to the big game again this season.

If the Harlan County Lady Bears thought they were in for an easy game Monday against Pineville, the visiting Lady... read more