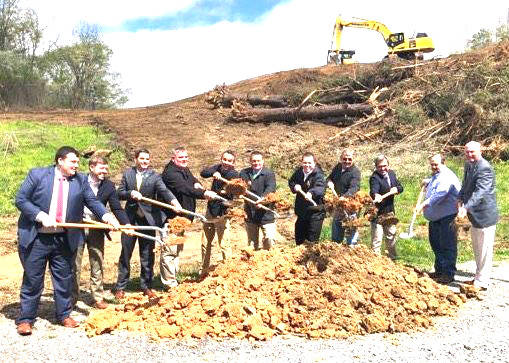 Harlan County natives experienced what some described as a monumental day on Monday as construction on the Harlan County Business Park began. This is the first certified build-ready site south of I-64 and east of I-75 at the Veterans’ Memorial Trail Entrance in Cumberland.

The groundbreaking ceremony opened with Harlan County Economic Development Authority Chairman Pete Cornett speaking on the importance of the site.

“This is a big step toward our future,” Cornett said.

Cornett added the new site will “be good for the trail,” being able to bring in more visitors.

One Harlan County Chairman Roger Fannin also spoke at the ceremony, driving home the fact that the site is the first certified build-ready site in the region.

“I am confident because of work being done here. Our future is very bright,” Fannin added before handing the microphone to Harlan County Judge-Executive Dan Mosley.

“That investment is a major reason we are standing here today,” Mosley said as he recognized Jared Arnett, the executive director of SOAR.

Mosley continued in his speech by stating the difficulty of finding property in Harlan County that wasn’t located in a flood plain, on top of a mountain without utilities, inaccessible broadband or proper highway to reach it.

“We brought Larry Calhoun in, and he said, ‘you have a great workforce, a beautiful community, you aren’t that isolated because you’re right in the middle of four interstates, geographically, you don’t have hurricanes or wildfires and your quality of life and cost of operations are perfect for economic development… but you’ve got to have a place to put these companies,” Mosley said.

After consideration, Mosley said the EDA identified the 150 acre piece of land as “a place to start to try and recruit companies to Harlan County.”

Mosley said the property was the only piece of land to “check all of the boxes,” by being out of the flood plain, more than 50 acres, accessible to multiple utilities and broadband and “right off one of the only four-lane sections of road that are in our county.”

Mosley went on to say that the golf course will not be closed, only that the layout of the ninth hole would be affected. Mosley said the golf course board has been very cooperative and he greatly appreciates their work. Mosley also spoke about the need to diversify the county in a way that guarantees a future for coming generations as they look to the future and celebrate the county’s bicentennial throughout the year.

Mosley continued by talking about the “naysayers” of the county, using Benham Inn as an example.

“You know, they said, ‘close that Benham Inn, it will bankrupt the county.’ We didn’t listen and we leased it to a private sector person, who has transformed it into a successful, profitable venture that will host the Eastern Kentucky Leadership Conference in 10 days,” Mosley said.

Mosley said there may be some people saying the business park is a bad investment.

“Here is what I will say: we are trying, trying for a better life for our people. Trying to give opportunity for those who want to make a better life and trying to make Harlan County an even better place to live, work and raise a family,” Mosley said. “Those who try, risk failure. Those who don’t try, guarantee it.”