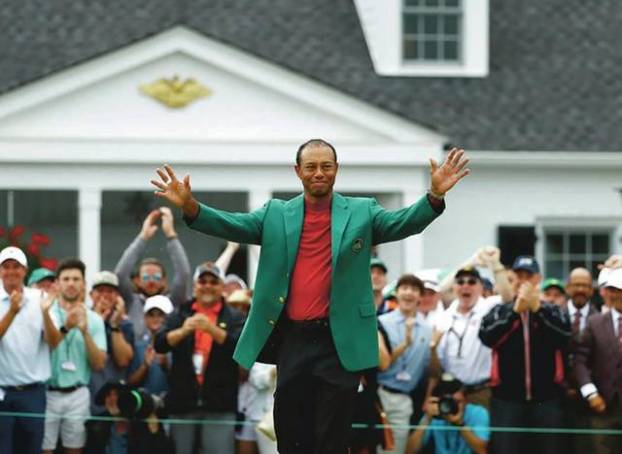 Tiger Woods smiled as he wore his green jacket after winning the Masters golf tournament on Sunday.

AUGUSTA, Ga. (AP) — No comeback by Tiger Woods was ever going to be complete without a major.

Now the question becomes how many more he can win.

So much appeal of that red shirt beneath a green jacket involved looking back at all Woods had to overcome to reach that moment — a Masters champion once again — that so many thought would never happen.

The fourth surgery to rebuild his left knee. The private affairs that became public, shattering his image. The balky back that required four more surgeries, the last one out of desperation because he could barely walk, much less play golf. And a new generation of stars he inspired who were younger, stronger and capable.

That’s why Woods celebrated his 15th major like never before — fist pumps without a club in his hand, because he couldn’t help himself walking off the 18th green.

“Overwhelming,” he said with a voice still hoarse from all that screaming.

He went 28 majors over 11 years without winning, and no sooner did he stretch his arms into that familiar green jacket — “Ah, it fits,” he said in Butler Cabin — was he asked about the 18 majors Jack Nicklaus won to set the gold standard in golf.

“I don’t know if he’s worried or not,” Woods said. “I’m sure he’s home just chilling and watching.”

Whether the record is in play, Nicklaus can expect plenty of questions. For years, he could rarely get through any conversation without someone asking him whether he thought Woods could top his mark.

“I thought for a long time that he was going to win again,” Nicklaus said Sunday night on Golf Channel. “The next two majors are at Bethpage, where he has won, and at Pebble Beach, where he has won. So, he has got me shaking in my boots, guys.”

The last part was delivered in jest.

The first part was factual.

Woods winning his fifth Masters was not entirely out of the blue. He capped the year of his great comeback last year by winning the Tour Championship in typical Tiger fashion, by building a lead on a tough, fast course at East Lake and not giving anyone much of a chance to catch him. He also briefly led Sunday in the British Open, and was one shot behind on the back nine at the PGA Championship.

“The win at East Lake was a big confidence booster for me because I had come close last year a couple times,” Woods said. “Still have to get it across the finish line, and I didn’t quite do it.”

So, imagine the effect of winning the Masters, especially the way this one played out. Six players had at least a share of the lead at one point on the back nine — four of them major champions — and there was a five-way tie for the lead when the final group was in the 15th fairway.

It was anyone’s game until Francesco Molinari, who earlier hit 8-iron in Rae’s Creek on the 12th hole for double bogey, hit a wedge off a tree limb and into the water on the par-5 15th that led to double bogey.

And then it became Woods’ game — a two-putt birdie to take the lead, an 8-iron that rolled down the slope next to the hole for a signature moment at this Masters.

“Well, I can win majors now,” Woods said with a laugh.

The PGA Championship is a month away at Bethpage Black, where Woods was dominant as ever in going wire-to-wire in the 2002 U.S. Open, and was right there with a chance in the 2009 U.S. Open except for a putter that refused to cooperate.

And then it’s the U.S. Open in June at Pebble Beach. If the Masters is the most memorable of his 15 majors, Pebble Beach remains his greatest performance. Woods won there in 2000 by a record 15 shots, even with a triple bogey in the third round. Ten years later, he tied for fourth at the U.S. Open at Pebble, three shots behind.

The courses are familiar. Woods is familiar with winning majors.

But it’s not that simple.

As dynamic as this Masters was for Woods, it was hard work and he needed help — from Molinari on the 12th and 15th holes, from a couple of good bounces out of the trees. That’s not unusual. Every major champion needs a break or two.

Getting to 18 is only easier because Woods is one major closer, a conversation caddie Joe LaCava said they have shared.

Nicklaus can only watch and admire, which he has done all along. And part of him is cheering.

“I don’t ever pull against anybody,” Nicklaus said. “Nobody wants their record to be broken. But I certainly wouldn’t want Tiger to be hurt and not to be able to do it. Of course, he is now pretty healthy and playing well. I wish him well, I always wish the guys well and I want them to play their best.”

And that’s probably what everyone will expect from Woods the rest of the year.

One night after watching Will Varner dominate them in a 13-strikeout performance that led to a 6-2 loss on Log... read more