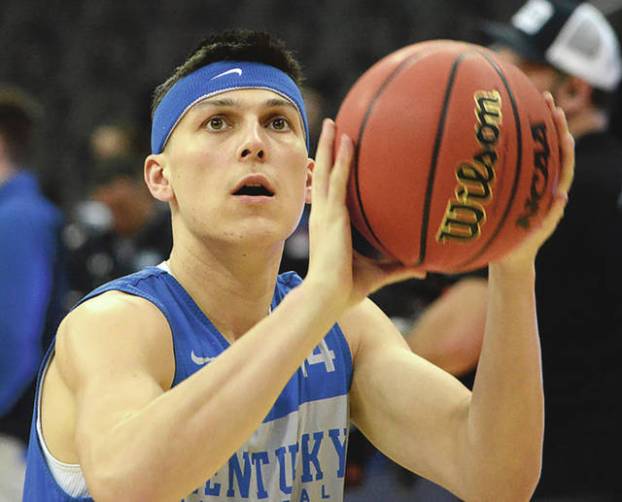 Kentucky’s Tyler Herro declared for the NBA Draft on Friday, but is leaving his options open for a possible return.

Herro declares for draft, but says he may return

The Kentucky freshman guard declared for the NBA Draft on Friday but is leaving his options open considering his future plans. Herro plans to hire an agent and return under new NCAA guidelines regarding the draft and will have until May 29 to make a final decision.

Herro discussed his options with his family and Kentucky coach John Calipari and “decided to test the waters and see where I stand in the NBA Draft process.”

“In order to make the most informed decision possible, but also leave my options open, I will be taking advantage of new rules allowing me to work with an agent,” he said. “If the information I receive supports that I’m likely to be a high draft pick, I want to be upfront with everyone in Big Blue Nation that I will keep my name in the NBA Draft. If the evaluations tell me I need to elevate my game further, I would be thrilled to return to Kentucky and help this team compete for a championship.”

Calipari praised Herro’s decision to declare for the draft and weighing his options.

“I think Tyler is making the best decision for him and his family and using the resources that the NCAA now allows. I’m in full support of Tyler’s decision,” Calipari said. “What I’m most proud of is how Tyler became not only an efficient offensive player but an efficient defensive player. He’s wired and driven like only a few others I’ve coached. I’ve had an absolute ball coaching him. Whatever he decides to do in the end, I will support.”

Herro helped lead the Wildcats to a 30-7 record and was Kentucky’s second-leading scorer behind PJ Washington. Herro averaged 14 points per game and the Wildcats compiled a 19-0 record when Herro scored 15 or more points per game. He shot 39.7 percent from the 3-point line and shot a blistering 93.5 percent from the free-throw line. Herro made 70 of his last 72 free-throw attempts.

“My freshman season at Kentucky was incredible,” Herro said. “As coach Cal and the staff promised, it was the hardest thing I’ve ever done. This staff challenged me to be the best version of myself. I’m proud of what we accomplished as a team and how I elevated my game personally.”

Herro joins Keldon Johnson and PJ Washington as three players who have declared for the draft. Johnson’s draft status is similar to Herro, but Washington is considered one of the top players in the draft and likely won’t be returning next season.

“Whatever happens over the next couple months, I want to thank BBN for its support this season and throughout this process,” he said. “I love this school, I love playing on the Kentucky stage, and I am grateful that my family is now part of the Kentucky family.”

Varner in control as Dragons down Bell

Will Varner followed a 17-strikeout performance in a win Saturday over Hancock County, Tenn., with a 13-strikeout night Thursday as... read more