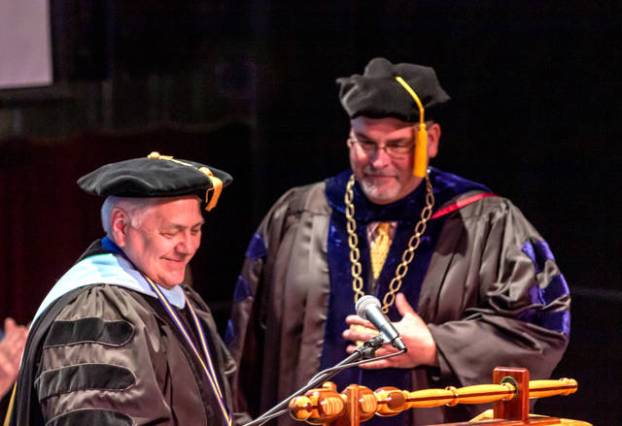 Southeast Kentucky Community and Technical College inaugurated President Vic Adams on April 5 in the Godbey Appalachian Center on the Cumberland campus. While Dr. Adams is the 11th executive to lead the institution, he is only the third to bear the official title of “president.”

The ceremony began with a processional played by Clara Atkins-Pope and retired Professor Ann Schertz, who serve as guardians of the Bosendorfer piano. Additional musical selections were performed by members of the Southeast Choir, led by Ryland Pope. Shana Lewis and Heather Lewis sang harmonized arrangements of the national anthem and “My Old Kentucky Home.”

Sam Coleman, former U.S. Marine and director of the Small Business Development Center, led the Pledge of Allegiance, and professors Astor Simpson and Carlton Hughes gave the invocation and benediction.

Presidents and cabinet members from seven other institutions preceded Southeast faculty and staff, all in graduation regalia, as they entered the Black Box Theatre. Dr. Adams was joined on the stage by former president Dr. Bruce Ayers, SKCTC Board Chair Rayburn Doss, SKCTC Foundation Board Chair Ed Harris and board representatives from the faculty, staff and students, Dr. Roy Silver, Rechelle Sampson and Danielle Saylor, respectively.

All guests on the stage offered greetings and a warm welcome to Dr. Adams.

In his opening remarks, Dr. Ayers emphasized the importance of the event, saying that it “reflects the gravity of the responsibility” that the new president will bear. He also said, “I believe it is also to remind all who are connected with the institution which the president will lead that the privilege and responsibility to lead can best be borne when all who have a stake in its success are willing to help in whatever way we can.”

Dr. Jay K. Box, president of the Kentucky Community and Technical College System, as well as Donna McClure, field representative for Sen. Mitch McConnell, also joined the speakers on stage. Dr. Box performed the installation, bestowing Dr. Adams with the presidential medallion. McClure read a letter from Sen. McConnell offering his congratulations: “Located in the heart of coal country, this institution provides students throughout the region with the opportunity to receive an education and to help them reach their potential.”

A documentary film created by Southeast Marketing Director Shawn Lind was shown, and Doss presented Dr. Adams with a gift from the faculty and staff, an oil painting of his beloved lab Asa painted by Jaime Claire Corum, Southeast’s artist-in-residence.

Immediately following the ceremony, a reception was held in the art gallery. Brew Moon of Kentucky catered the event, and Atkins-Pope shared her talents on the harp.

“I am humbled by the support I have received today,” said Adams. “I want to thank everyone who has come out today to support me, this college, and most of all, our students.”

The Harlan City Council discussed and approved a sanitary sewer extension project agreement during a meeting on Monday. A motion... read more