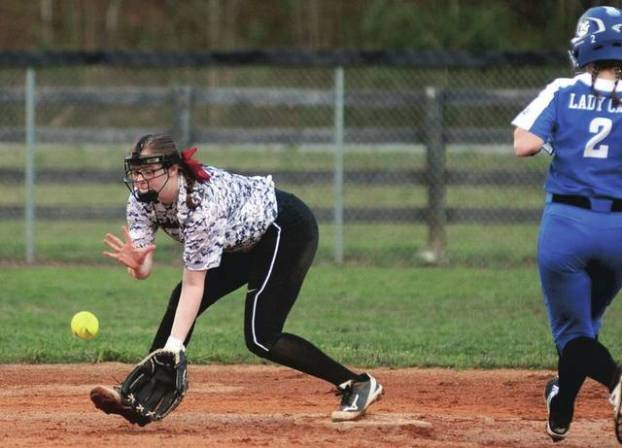 Harlan County senior shortstop Emily Collett fielded a ground ball in Tuesday’s game against Bell County. Collett had an RBI single in the fourth inning Thursday as the Lady Bears rallied for a 10-7 win over Middlesboro.

Lady Bears bounce back, down Middlesboro

Two days after playing their worst game of the season in a 6-3 loss to visiting Bell County, the Harlan County Lady Bears demonstrated Thursday that they could still be the best team in the 52nd District.

Harlan County (5-2 overall, 1-1 district) fell behind 5-1 with seven errors in the first two innings, then battled back for a 10-7 victory over visiting Middlesboro.

“I think the Bell County game gave us a wake-up call. I hope it did,” Harlan County coach Tim McElyea said. “Bell is improved, but Middlesboro is a good club. They are the team to beat with all they have back. This is a big win. They are a quality team.”

“We have to tighten up some things defensively,” McElyea said. “The first two innings were ugly, but I liked the way we battled.”

The Lady Bears showed a much more aggressive approach at the plate than two days earlier, pounding out nine hits against the Lady Jackets. Sophomore catcher Brandy Adams hit her third homer of the season, this one inside the park, and added a double. Nikki Creech and Hannah Johnson each added two singles. Emily Collett, Kerrigan Creech and Emily Evans contributed one single each.

“We hit the ball well,” McElyea said. “We moved our lineup around a little and moved Collett up in the order. She came through tonight. We also had some key hits at the bottom. I’m tickled to death. This district is tight.”

McCullough allowed eight runs on nine hits in six innings, striking out four and walking two. Kailey Owens allowed one run on one hit with one strikeout and one walk in one inning.

Frazier opened the game with an infield single and came around to score after two errors and Sowders’ sacrifice fly. The third error of the inning a ball hit by McCullough pushed the lead to 201.

Creech singled in the bottom of the first and scored on Johnson’s hit.

Young had a two-run single in the second inning after an error and a walk. Marcum, McCullough and Brown opened the third inning with singles as the lead grew to 5-1.

Harlan County fought back with a four-run third. Adams and Allee Galloway were hit by.pitches to force in a run after Collett reached on a fielder’s choice and Johnson singled. Kerrigan Creech singled in two runs and Evans tied the game with a single to right.

Young, Sowders and McCullough opened the fourth inning with singles to put Middlesboro back on top, but Creech worked out of the jam.

Collett singled home the tying run in the bottom of the inning. Adams was hit by a pitch to force in a run and Kerrigan Creech added a sacrifice fly.

Harlan County missed a scoring opportunity in the fifth after Collett walked. Johnson hit a shot to center that Frazier ran down with a diving stop.

Adams led off the sixth with the most exciting play of the game as her line drive went off the glove off right fielder Lindsey Buis. As the ball bounced toward the fence, Adams raced around for an inside-the-park homer. HCHS added another run when courtesy runner Brenna Early came around to score when Evans was safe on an error.

Kerrigan Creech got stronger as the game went on and she retired the final five Lady Jackets to close out the win.

Harlan County travels to Leslie County for a doubleheader on Friday. Middlesboro plays host to Claiborne, Tenn., on Monday.

LEXINGTON, Ky. (KT) — Keldon Johnson has decided to test the waters before determining his next career move. The Kentucky... read more