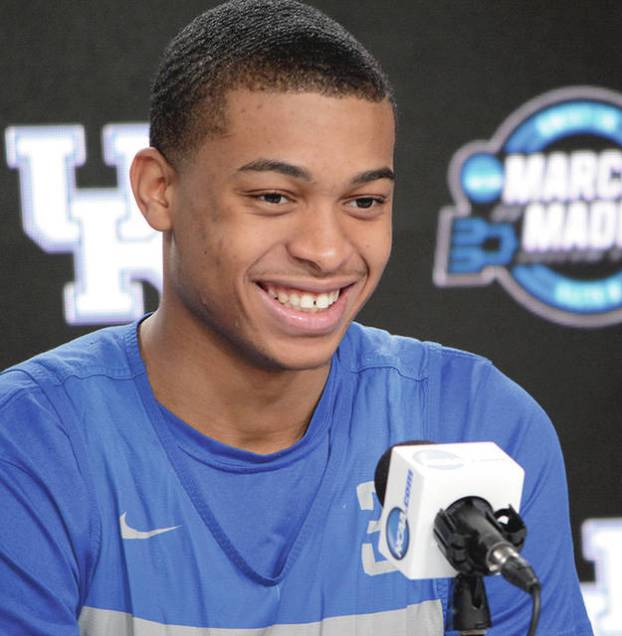 Keldon Johnson flashed a smile to the media during the NCAA Tournament. Johnson opted to declare for the NBA Draft on Wednesday, but could return for a second season.

LEXINGTON, Ky. (KT) — Keldon Johnson has decided to test the waters before determining his next career move.

The Kentucky freshman guard declared for the NBA Draft on Wednesday but is leaving the door open for a second tour of duty with the Wildcats. Johnson can sign with an agent certified by the NCAA and can return for a second season if he decides to forgo the NBA Draft and return to play for the Wildcats next season. He has until May 29 — 10 days after the NBA Combine — to make a final decision.

“I’ve spent a lot of time over the last week thinking about what’s best for me and my future. I’ve sat down with my family and Coach Cal and determined that testing the waters and getting information back from the NBA is the best thing for me at this time. My hope is to be a lottery pick. If I am, I plan on pursuing my dreams and staying in the draft, but I want to go through the process first and get the correct information.

“This season was everything I dreamed of and more when I decided to come to Kentucky. I wish we could have played a few more games, but it doesn’t take away from the special memories we made. Thank you to the Big Blue Nation for your support and love through this important time in my life.”

Johnson started 36 games last season and averaged 13.5 points per game. He averaged 5.9 rebounds per game and was third on the team in both categories.

“Keldon is a gym rat who has improved in all areas this season,” Kentucky coach John Calipari said. “Keldon has the athleticism, physique, and skill set to compete at a high level in that league. His ability to make people around him better and his willingness to share and be a great teammate is what will set him apart when he goes through workouts. I fully support his decision to go through this process and get all the information. Whatever he decides, he will have my full support.”

Johnson was appreciative of God, the Kentucky coaching staff and his family for their support during the season and throughout the decision-making process.

“First of all, I want to thank God because none of this would be possible without Him,” Johnson said. “Thank you to my family for always having my back and getting me to this point. Thank you to Coach Cal for pushing me on and off the court to be the best player I can be. He never let me take a day off. I want to thank coach KP (Kenny Payne) for pushing me every day and for being a father figure away from home. Thank you to Coach (Tony) Barbee for being there through tough times. I also want to thank Coach Joel (Justus) and Coach (John) Robic for always providing a helping hand when I needed and for always supporting me.”

Johnson is the second Kentucky player to declare for the draft this week. Sophomore PJ Washington decided to skip his junior season and won’t return next year.

Freshman guard Ashton Hagans opted to return for a second season on Tuesday.

The NBA Combine is set for May 15-19 in Chicago and the NBA Draft will be June 20 at the Barclays Center in Brooklyn New York.