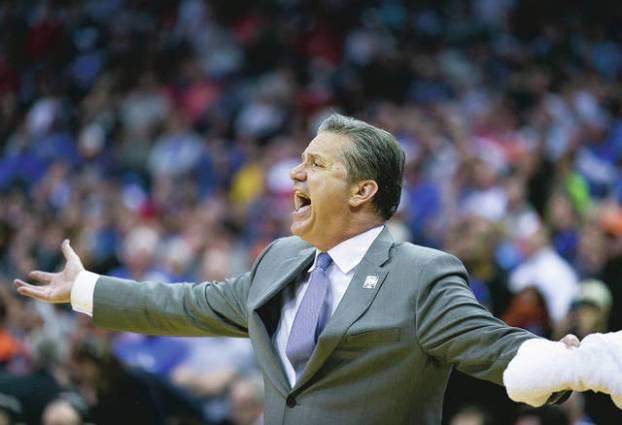 Coach John Calipari questioned a call in Kentucky’s loss to Auburn in the Midwest Region finals.

LEXINGTON (KT) – John Calipari will finish his coaching career with the University of Kentucky, the school announced Monday night.

Calipari, 60, agreed to terms on a long-term contract after completing his 10th season as head coach with Sunday’s loss to Auburn in the Midwest Region championship game.

Earlier in the day, Seth Davis of the Athletic, reported that reported interest from UCLA that Kentucky had offered Calipari “what is essentially a lifetime contract” to remain as head coach.

“Where else would I want to coach?” Caliapri said on his radio show Monday night. “Now, there are people that call at the end of every year. You get calls, but the reality of it is, this has been in the works for a while. They presented it to me.”

Calipari was under contract through 2024 following a seven-year extension in 2017. He is the highest paid coach in college basketball and makes $8 million per year. UK did not announce terms of Calipari’s new long-term deal.

Calipari, 60, has led Kentucky to four Final Fours and won the 2012 national championship. He has been to seven Elite Eights in the 10 years.

“Being at Kentucky is like no other,” Calipari said.