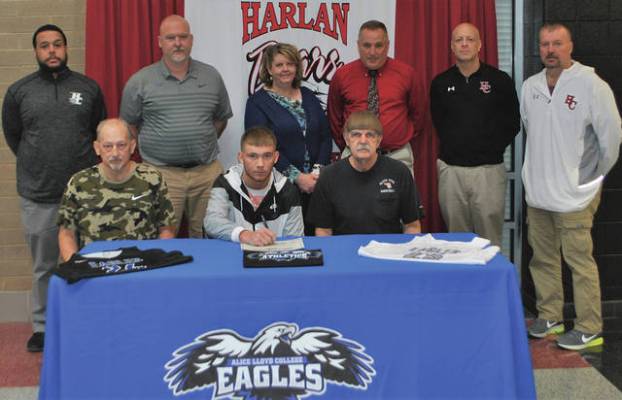 Gabe Price didn’t break any scoring records in his four years with the Harlan County High School basketball team or wow the crowd with any high-flying dunks. But for those closest to the program, Price will always be remembered for his hard work, team-first attitude and intensity — traits that led Alice Lloyd coach J.R. Hammond to HCHS on Friday to sign Harlan County’s 6-foot senior guard as the newest member of his program.

“His hard work, intensity and effort,” Hammond said when asked why he wanted Price at Alice Lloyd. “I’m looking for kids with competitive drive and emotion, and he’s got it. We’ve got some really good players coming back next year, and I just need some more energy and enthusiasm. He will learn and get used to college basketball.”

Price was a key reserve for the Bears as a sophomore, averaging 2.2 points per game as Harlan County won its first 13th Region Tournament title. He was at his best in the biggest game the Bears have ever played, scoring 12 points in a 77-65 loss to Scott in the state tournament at Rupp Arena. Price averaged 3.9 points and 3.1 rebounds as a junior as HCHS won its fourth straight 52nd District title and finished 20-9. He averaged 7.7 points and 5.6 rebounds per game as a senior as the Bears finished 19-8.

“He’s set an example for all the kids who came through here, even some of the kids before him,” Harlan County coach Michael Jones said. “He’s one of the hardest workers we’ve had here. There’s one thing you never had to question about Gabe in practice or games — he will give you 110 percent every night. That’s the example he brought to our team and will take with him to Alice Lloyd.”

Hammond, who recently completed his 10th season as head coach, is looking forward to adding Price to his squad next season. The Eagles finished 13-17 overall in 2019 and 6-12 in the River States Conference.

“We love hard working kids from eastern Kentucky, and he’s also a great student,” he said. “He’s interested in criminal justice and we’re starting a new program, so he will be the first freshman in the program. It’s going to be a great experience for him.”

“Gabe is the type of kid who will handle what ever is thrown at him,” Jones said. “He not only waited his turn here, but he also played out of position. He never once complained. He just wanted to be on the floor. He’s as hard-nosed as they come, and that’s what the coach loves about him.”

Price waited his turn before earning a starting role at Harlan County and he expects to follow a similar plan on the next level.

“It’s a small school and I felt comfortable there,” Price said of why he chose Alice Lloyd. “I’ll just keep working on my game and my shot. I think I can play some eventually. I know I have to work and wait my turn.”

KANSAS CITY, Mo. (KT) — The third time was a charm for Auburn and it ended Kentucky’s season. The fifth-seeded... read more