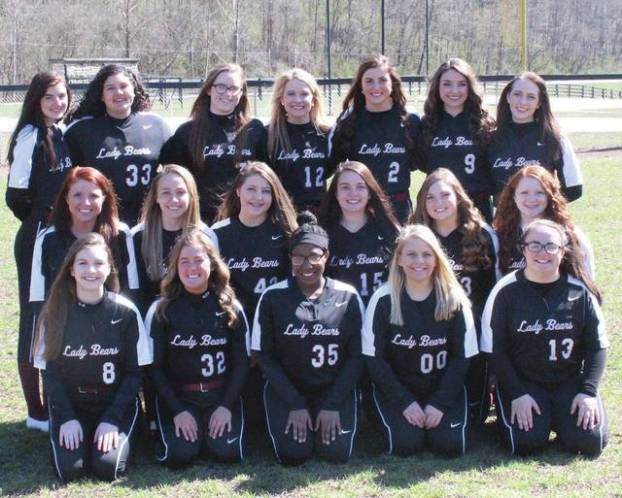 Lady Bears working to rebuild on the run

Good programs, it has been said, don’t rebuild, they reload.

Harlan County will find out just how good its program is this spring after watching six seniors graduate, including four starters. The Lady Bears lost two other starters for other reasons, so coach Tim McElyea wasn’t sure what to expect when practice began.

“We lost 10 players off last year’s roster and we haven’t been this young since I’ve been here,” McElyea said. “I like the way this team gets along. There is no drama, and that’s a pleasure. This team is focused, and they seem to love the game.”

One of the Lady Bears’ biggest losses was on the mound where Destinee Jenkins was a five-year starter. Jenkins posted a 12-11 mark last year, while Kacie Russell was 4-0. Jenkins and Russell had handled almost all of Harlan County’s pitching the last four seasons.

Jenkins and Russell had a lot of innings and wins under their belts and complemented each other real well,” McElyea said. “Kerrigan has been surprising though. You worry about a young pitcher not throwing strikes, but she has shown a lot of poise early this season. She doesn’t seem to get rattled. She will be our workhorse.

“Clark throws a lot of off-speed pitches. When she locates, she will get a lot of ground balls. Alred is a fastball-changeup pitcher who also locates well.”

Creech gives the Lady Bears outstanding defense at a key position and speed at the top of the lineup. Creech will play at the University of the Cumberlands next year.

“She is our leader. She has really stepped up there,” McElyea said. “She has really started strong. She is hitting well and has already thrown out a couple of runners. I’d put her up against anyone in the region at her position.”

Johnson is one of the region’s most feared hitters and will take over in the third spot in the Harlan County lineup.

“Hannah has improved so much at third with her arm and glove,” McElyea said. “She has power to all fields. I think she is one of the best RBI and gap hitters in the region.”

Brandy Adams moves from second base to take over for Emily Long at catcher. Adams had a breakout freshman campaign last year and provides a solid middle of the order hitter.

“With what we’ve lost, I was worried about having someone to protect Johnson in the lineup, but Adams has done that,” McElyea said. “She is strong and is a gap hitter. She is a hard-nosed kid who blocks pitches well.”

Clark and Kerrigan Creech will split time at first base, depending on who is pitching. Russell was a four-year starter at the position.

“Clark is a real good bunter and good defender,” McElyea said. “Kerrigan has improved a lot in her hitting. She is putting the bat on the ball lately.”

Emily Evans, the daughter of former Evarts baseball standout Robert Evans, moves in at second base. Evans is off to a good start, driving in three runs on two hits against Letcher Central.

“She has hit the ball pretty well. Her bat has been a good surprise,” McElyea said. “She has some work to do at second base, but she is getting better. She has a good work ethic.”

Emily Collett is back for her senior season at shortstop. She will be counted on for more offense this season with so many key players graduating and has responded thus far with a three-hit game against Harlan earlier in the week.

“She is a solid shortstop with a good arm. She puts the ball in play,” McElyea said.

Alred will take over in left field and bat behind Creech at the top of the lineup. Alred replaces T.C. Somersall, who was injured in an automobile accident.

“Rhileigh is fast and has made the adjustment to the outfield,” McElyea said. “She has been another pleasant surprise. She is playing well out there.”

Allee Galloway, a sophomore, moves from the infield to become the starter in right field.

“Allee has speed and I like putting speed in the outfield,” McElyea said. “She has shortened her swing a little and has a couple of big hits already.”

After being ranked among the region’s top teams the last several years, the Lady Bears are expected to spend this season rebuilding, but McElyea likes the way his team has played in a 3-1 start this season and says the Lady Bears could exceed expectations.

“We’ll go as far as our pitching and defense take us,” McElyea said. “I think we’ll have a pretty good hitting club, especially 1 through 6. This team is focused and they seem to love the game. I’ve been very pleased with them so far.”

May 3-4 at Hazard Mountain Classic

May 9 at Clay County

May 10 at Knox Central

Finding a replacement for Destinee Jenkins on the mound was perhaps the biggest question mark surrounding the Harlan County Lady... read more